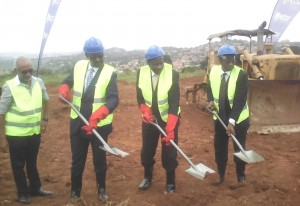 Kasaija (centre) officiates at the ground-breaking flanked by Byarugaba and Byabakama at Lubowa for planned 2740 housing units.

September 27—The National Social Security Fund (NSSF), a mandatory contribution scheme, is spending an estimated $400 million to build 2740 new housing units in Lubowa, about 10 kilometres south of the capital, Kampala.

“There is great scarcity of affordable and quality housing for the Uganda’s ever growing middle class. By the time the full project is completed in 10 years, we are very convinced that the demand for such housing units will be high and we shall be able to recover the invested money in a short time,” Richard Byarugaba, the NSSF managing director said at the ground-breaking this week.

Finance minister, Matia Kasaija launched the project to be spread over 565 acres of land. Apart from the houses, the project will also consist of offices, schools, a hospital, leisure and commercial areas, police and fire stations, places of worship, park, hotels and other features.

Kasaija said, “The housing sector currently has a deficit of over two million housing units and this is estimated to increase by 300,000 units per annum. This project and the other housing projects that you have carried out are in line with Uganda’s national plan to provide decent housing for all urban dwellers by 2020.”

He asked the NSSF top management to also consider building housing for low income earners, considering the high percentage of people residing in city slums where conditions are difficult.

Patrick Byabakama, the NSSF chairman, said the project is one of the many that the Fund, which has assets of $2 billion, is planning to construct including the UGX15.5 billion (about $4 million) Mbuya housing project, UGX3.3 billion Jinja commercial complex, and a similar investment in Mbarara, western Uganda.

Byarugaba said once completed, the Lubowa housing units will be sold to the general public at the prevailing market prices, but priority will be given to NSSF members.