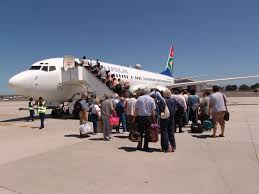 Passengers boarding a South African Airways B737-800 in Entebbe

KAMPALA, JUNE16 – South African flag carrier SAA, will at the end of July start testing the waters with  double departures  between Entebbe and  Johannesburg  on Sundays, a development that industry observers believe is the beginning of the long-awaited deployment of a double-daily frequency on the route.

Although an official at the SAA Kampala office said the second departure on Sundays is response to customers who wanted to be able to spend more time with their families on either end, frequent travelers will recall a time back in the later 1990’s when travelers had the option of flying either SAA or Uganda Airlines on the odd-numbered days when their schedule coincided. After the liquidation of Uganda Airlines in 2001, that role would be assumed by the short-lived East African Airlines that went bust in mid- 2003.

The carrier will however maintain its staggered departure schedule with afternoon departures out of Entebbe from Monday through Saturday and the reverse on order on the alternate days.

Uganda is host to a number of South Africa headquartered multinationals who have been generating  a lot of business travel but a second departure  on Sunday serves both this segment and leisure travelers who may want to make a short hop to either Entebbe or Jose over the weekend. SAA’s move is also likely to reset competition on the route, where there is significant spillage of origin to destination traffic to Kenya Airways and Rwandair.

With the South African rand at record lows against the US dollar and a fairly stable Ugandan unit, the new flight could as well generate new leisure traffic.