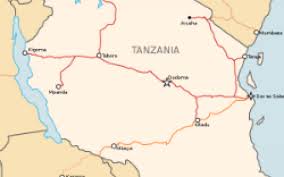 KAMPALA DECEMBER 22- After a period of uncertainty over where the dice of Rwanda’s SGR connection would settle Kigali’s plans gained clarity this week. According to reports in the regional press, the Rwanda Transport Development Agency has on behalf of Tanzania and Burundi, its partners in the $7.6 billion Southern Corridor Standard Gauge Project, shortlisted 12 firms that responded to a request for proposals for the line that will run from the Tanzanian port of Dar es Salaam to Isaka onward to Kigali and Bujumbura.
Unlike its counterparts Kenya, Uganda and South Sudan that have opted to use public funding to develop their overpriced SGR, the Southern Corridor has opted for a the hybrid public private partnership model. According to the reports, the selected firm of firms will construct, operate and maintain the proposed network.
For the region or more specifically for the planners in Nairobi and Kampala, Kigali’s decision changes the SGR equation in more than one way. For Kenya, Kigali’s drift to the south has serious implications for traffic projections for both Mombasa port and the SGR west of Nairobi. Rwanda accounts for upwards of 4 percent of gross transit cargo volumes out of Mombasa – a number significant enough for anybody computing the short term cash flows for the northern corridor SGR.
While it carries inherent political risk, a hookup to the Southern Corridor SGR makes the most economic sense for Rwanda. The project is coming at a much lower cost than the northern corridor project which because of terrain and procurement shenanigans will cost much more per kilometer. For Kigali, going north would in effect mean committing to a much higher tariff.
Kigali’s breaking cover may however come as a relief for Kampala which can now focus its efforts on developing the SGR connections with South Sudan and the DRC. Until a rebuke from President Kagame last June over the priority Kampala was giving to the connection with Juba, the southern route to Kigali ranked third in Uganda’s merit order for SGR development. 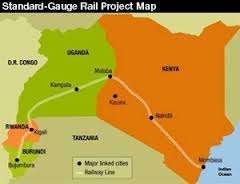 The proposed alignment for the Kampala-Kigali SGR

Ugandan planners always believed that from a purely economic point of view, Tanzania offered Rwanda a more natural connection to SGR than Uganda and Kenya. Privately, they worried about the possibility of shouldering the huge development cost of the 300km plus connection to Mirama hills when Rwanda could easily opt for the Tanzania route leaving Uganda with a white elephant. Concerns rose a score higher in Kampala when the SGR project managers found it increasingly difficult to get substantive responses about Kigali’s preferred interconnection link with Uganda.
Given the short distances involved – 110km between Kigali and Mirama Hills- Rwanda will eventually hook up with the northern corridor SGR, if only to have a fallback position given the unpredictable political temperament in Dar. But that makes it a second tier development and the ultimate loser for now would be Chinese contractor CCECC who after getting cheated out of the contract for Uganda’s northern SGR was consoled with a MoU for development of the southern leg to Rwanda. CCECC was supposed to build the line on both sides of the border but has lately been getting a cold shoulder from Kigali who blamed a lack of clarity from Kampala for their reluctance to enter a MoU with the Chinese contractor.
The latest developments are a relief to Kampala which calculates that it stands to gain more from expediting connections with South Sudan and the DRC. Both Connections would increase the distance transit cargo is carried on the Ugandan network, increasing its share of earnings from the tariff. The connection to Nimule on the border with South Sudan would almost double the current length of just over 200kilometres that transit cargo is carried on the Ugandan rail network. Extending the line to Goli and Aruu – the two interface points the DRC proposes to connect with the Ugandan network- would increase the distance almost four fold.
For Uganda however, while a DRC connection improves the economic case for its SGR because it would offer the most natural route for taking iron deposits in north-eastern DRC to the market, Kigali was a better near term prospect especially given the continuing debate over the viability of SGR beyond Nairobi. For Kenya the question is how much of a dynamic will Kigali’s decision prove to be in terms of its potential to draw not just Rwanda but DRC bound cargo from Mombasa.