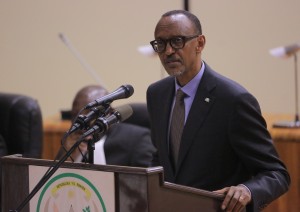 March 7–In the run-up to the delayed East African Community Summit that is expected to decide whether the EAC signs the European Union Economic Partnership Agreement (EPA) as a regional bloc, Rwandan President Paul Kagame has hinted of the dangers of being narrow-minded.

“Whether at the continental or the regional level, our goals will not be attained if we get lost in counterproductive divisions and prioritise narrow interests over the common good, as we keep seeing in various contexts. It is really about working together to advance everybody’s interests,” he said in a speech to the East African Legislative Assembly (EALA) sitting in Kigali. EALA members from Burundi did not attend.

The five EAC presidents were supposed to hold their first summit of the year last month. However disagreements over the economic implications of signing the EPA has forced at least two postponements. The EU is the second largest economy in the world.

Kagame told legislators, “There are two parts of this to keep in mind. First, when the good progress made internally by each country is aggregated, the benefits are even better for everybody in our region. Second, there is no disadvantage from minding each other’s business, which simply means taking our respective needs and interests seriously and indeed adopting them as common objectives.”

Basically the EPA calls for reciprocal treatment in line with the World Trade Organisation rules. It is a mutual understanding that no tariffs are imposed on traded goods, however in case of the EAC, import duties will be slapped on a variety of European goods to enable domestic industries to adjust to greater competition. Tanzania says this is not enough and insists infant industries will not cope even with a phased approach that is expected to end after 10 to 15 years. Talks between the EAC’s 150-million market and the EU over the EPA started nearly 10 years ago.

Much to the unhappiness of Tanzania and the puzzlement of Uganda, (who has been trying to play honest broker), Kenya and Rwanda stole a march on the rest by signing the EPA late last year in Brussels. However, the terms of the EPA cannot be implemented unless the other three member states also sign up. The technocrats in Brussels are getting impatient in light of the pending Brexit negotiations with the UK governement. It is unlikely the EAC will be given more time.

Kagame said, “When we work together, we are all better off. When we work against each other, everyone is worse off and a loser. So let’s empower our institutions to do what they are supposed to do in support of our collective prosperity. The East African Legislative Assembly clearly has an important role to play.”

Failure to sign as a bloc will mean Kenya faces imminent tariff payments on its annual $1 billion cut flower and horticultural exports to the EU. This is because Kenya is not on the Least Developed Countries (LDC) list comprising of 48 members. As LDCs, the other four EAC members can still export to the EU under the ‘Everything But Arm’s preferential trading provision which basically means the status quo remains in place at the disadvantage to Kenya.

Kagame said the EAC members have worked together to significantly deepen regional integration. Much of this progress was the result of political will, responding to the needs and aspirations of EAC citizens.

He said people move more freely than ever before and communication within the region has become more affordable and convenient. It is easier to trade and do business with each other and countries are collaborating to expand energy and transportation infrastructure.

“All this has generated a good deal of excitement among our citizens and in the markets as well. East Africa is increasingly perceived as a region on the move. We have to continue to meet these high expectations. We therefore count on you, in the oversight role of our regional legislature, to help ensure we maintain momentum and stay on course,” he said.