May 23, 2018—English premier league team, Arsenal, have signed a shirt sleeve deal reportedly worth  £30 million  ($40 million) over three years with a Rwanda Development Board (RDB) subsidiary that will help promote the country’s tourism attractions. 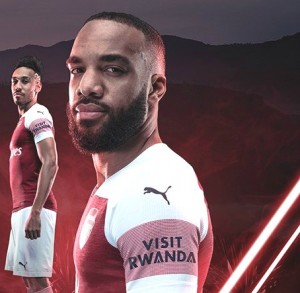 Alexandre Lacazette (in the foreground) and Pierre-Emerick Aubameyang, will be reminding viewers of Rwanda’s tourism attractions next season.

According to a statement by the London club,  “The three-year deal will also see ‘Visit Rwanda’ become our official Tourism Partner. The ‘Visit Rwanda’ logo will feature on the left sleeve of all our teams next season. The new kit for season 2018/19 was unveiled on May 22.”

Sources say although the financial details were not revealed the figure is between £20 million and £30 million, but below the £50 million five-year deal Hyundai signed with Chelsea last week.  Mirror online writes that Arsenal unveiled their new home kit on Tuesday in what could be their last year with PUMA, with the current £30 million-a-year deal expiring at the end of the season.

Arsenal ended up sixth this season and will not play Champions League football, but is still one of the most well supported clubs in the world. Arsene Wenger, the manager for 22 years, recently called it quits and early this week,  the board appointed former PSG manager,  Unai Emery as his replacement.

Clare Akamanzi, the RDB chief executive officer said: “We’re thrilled to be partnering with Arsenal and showcasing the vibrancy and beauty of our country.  Rwanda is a country pulsing with energy, creativity and innovation.

She said, “Visit Rwanda and discover why we are the second fastest growing economy in Africa.  Investors in Rwanda are able to register their businesses in only six hours and prepare to enjoy the opportunities accrued from the free trade agreements that we’ve signed with over 50 countries.”

Arsenal’s chief commercial officer, Vinai Venkatesham, said: “This is an exciting partnership which will see us support Rwanda’s ambition to build their tourism industry. The country has been transformed in recent years and Arsenal’s huge following will bring Rwanda into people’s minds in a new and dynamic way.”

According to the statement, the Arsenal shirt is seen 35 million times a day globally. “We are one of the most viewed teams around the world. We look forward to working with the ‘Visit Rwanda’ team to further establish the country as a leading tourist destination,” Venkatesham, said.

Rwanda is ranked as the second easiest place to do business in Africa by the World Bank and has been awarded for its leadership in tourism and competitiveness by the World Travel and Tourism Council (WTTC) and the World Economic Forum respectively.

‘Visit Rwanda’ will gain global exposure through branding on match day LED boards at Emirates Stadium, all the interview backdrops and a broad range of other marketing rights. They will also have the opportunity to engage our fans around the world through the club’s social media channels.