Rwanda in recovery after 2016 slowdown

September 7—Rwanda’s economy has been in the doldrums since mid-2016, but the World Bank thinks by […]

September 7—Rwanda’s economy has been in the doldrums since mid-2016, but the World Bank thinks by the end of the year a full recovery will be taking place. 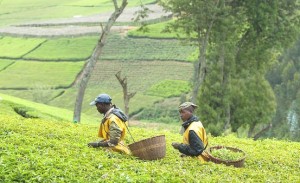 Pickers for one of Rwanda’s major exports–tea, but the World Bank believes selling goods abroad is an ideal strategy for long term growth.

According to the 10th edition of the Rwanda Economic Update, Rwanda’s economic growth has been slowing down since about June 2016, resulting in a 6 percent growth in 2016 and in 4.2 percent annualized growth in the first quarter of 2017.

This slowdown was mainly due to a combination of the drought, weak export prices and construction activities following the completion of large investment projects in 2016. However, the growth is expected to peak up in the second half of 2017.

Titled ‘Sustaining Growth by Building on Export Opportunities’ the report highlights improvement in macroeconomic policy environment in 2017 with inflation decelerating to below 5 percent by June 2017 down from the peak of more than 8 percent recorded in February. Depreciation of the exchange rate has also alleviated the pressure on foreign exchange reserves and is expected to contribute to narrowing of external imbalances.

Analyzing the export sector performance as a special topic, the Update showed that exports increased from just $400 million in 2007 to $1.6 billion in 2016. Non-traditional exports have emerged as an important driver of that growth, thus laying the foundations for export-led growth in Rwanda. Exports to the region, and especially to the Democratic Republic of Congo and to the East African Community (EAC) countries, mainly as re-exports and through small-scale cross-border trade contributed the bulk of export growth.

Aghassi Mkrtchyan, the World Bank Senior Economist said in a statement, “Although Rwanda’s export sector is still small, the progress made in the past decade sends a clear message that an export-led growth is within reach for Rwanda, and country’s long-term growth strategy should continue focusing on strengthening economy’s capacity to produce exportable goods and services.”

To ensure sustainable export growth, the Rwanda Economic Update highlights some policy considerations including maintaining a competitive real exchange rate by avoiding exchange rate misalignment, focusing on agriculture as a strategic sector that provides raw materials for emerging agribusiness, and continued engagement at the regional level to identify and remove non-tariff barriers within the EAC region.

Returning to a higher growth trajectory in 2018 is attainable, although there are risks, according to the report. In the medium term, economic activity will benefit from the expected recovery of prices of traditional exports, including minerals, tea, and coffee. But the key for sustaining growth at the rates in line with Rwanda’s historical average is private sector investment activity, especially in the tradable and export oriented sectors.