January 16—It is ironic that four years ago when the presidents of Kenya, Rwanda and Uganda […]

January 16—It is ironic that four years ago when the presidents of Kenya, Rwanda and Uganda agreed to a joint development of a Standard Gauge Railway (SGR) between Mombasa through Kampala and eventually Kigali, Tanzania was hardly mentioned. 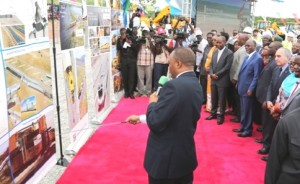 Last year President Magufuli (blue suit) laid a foundation stone before being given a briefing on the first phase of Tanzania’s SGR due for completion in 2019.

The proposed $14 billion SGR was supposed to be the initial centerpiece of the Northern Corridor Integration Projects, and an example of how the ‘coalition of the willing’ was steaming ahead. Kenya completed the Mombasa-Nairobi section last year.

But over the weekend, Tanzania’s President John Magufuli got the last laugh. Probably concerned about the funding gaps and the delays surrounding the SGR extension into Uganda from Kenya, President Paul Kagame finally went to Dar es Salaam to signal his acceptance of an alternative.

Hints had been swirling around since mid-2016 of a plan to have a 450 kilometre SGR line built between Kigali and the inland container terminal (ICT) at Ishaka in western Tanzania. It would be jointly financed by the two governments.

Ishaka will in turn be linked to Dar es Salaam port through the new SGR being built in phases along the Central Corridor. “President Kagame and I want to unveil the foundation stone to usher the construction this year,” Magufuli told a news conference.

For Rwanda, the reasoning is probably simple. First, it would be cheaper and faster. Secondly, the bulk of Rwandan transit cargo now passes through Tanzania. According to a 2011 report done by consultants Louis Berger, except for Uganda, (South Sudan was a later entrant), other hinterland states prefer the Central Corridor and the port of Dar es Salaam for their transit traffic.

Based on figures available at that time, 99% of Uganda’s imports and 98% of exports go through Kenya. On the other hand, the position for Rwanda was 43% and 35% respectively. For eastern Democratic Republic of Congo the figures were 32% and 18% while Burundi recorded 6% and 2%.

As confirmation, towards the end of last year, Rwanda High Commissioner to Tanzania, Eugene Kayihura, was given a tour of new developments at Dar port. He said, “Currently the Dar es Salaam port has been handling at least 90% of all imported goods from Rwanda, thus putting a record of rapid increase of Rwandan cargo handled at Dar es Salaam port.”

According to some experts the economic sense of an SGR to Kampala still remains debatable and is probably one reason why the Chinese are taking such a long time to decide on lending the $2 billion. The value of imports far outweighs that of exports which raises the question of whether the line will be able to pay for itself. Demand for imports is relatively inelastic and according Louis Berger, the customer will “pay any price” to get them. Hence the stacks of containers we see piled high in the yards of major freight forwarding companies.

On the other hand, exports from Uganda are quite price-sensitive since they are generally semi or unprocessed commodities that compete in international markets. Uganda has to step up production of manufactured goods which are currently about 25%-30% of total exports, but of relatively little added-value and mostly sold in East Africa.

However in the meantime, Uganda could take a closer look at improving Port Bell and Jinja ports, because the SGR is more likely to reach Kisumu in the foreseeable future rather than Kampala.