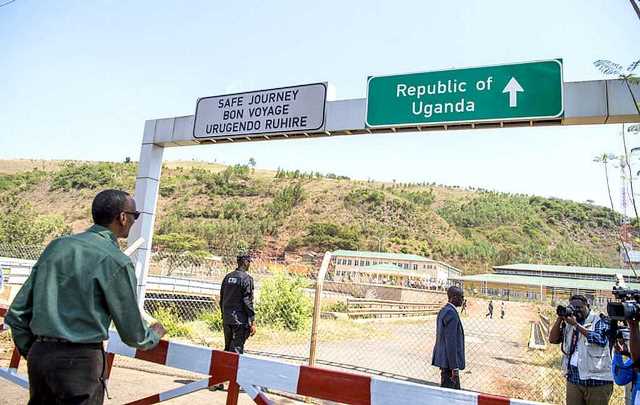 In this undated photo, President Kagame is seen standing on the Rwandan side of the Kagitumba border crossing with Uganda 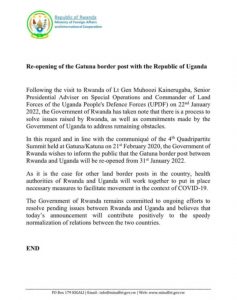 Rwanda will reopen of  its Gatuna land border with Uganda to human and commercial traffic starting January 31, a statement attributed to the Rwandan Ministry of Foreign Affairs indicates. The decision became public just after mid-night Rwanda time January 28, in a post on social networking site Twitter.

The development follows months of shuttle diplomacy between Kigali and Kampala that saw Uganda’s commander of land forces, Lt.Gen Muhoozi Kainerugaba, hold a one day meeting  with President Paul Kagame in Kigali, on January 22.

In a brief statement, Rwanda said that following the visit to Kigali by Gen. Muhoozi, Rwanda had taken note of efforts by Uganda to address the issues it had raised as well as a process to address pending issues.

“In this regard and in line with the communique of the 4th Quadripartite Summit held at Gatuna/Katuna on 21st February 2020, the Government of Rwanda wishes to inform the public that the border post between Rwanda and Uganda will be re-opened from January 31,2022,” the unsigned statement said.

Health authorities from the two countries would work together to establishCoovid-19 protocols for movement of people, the statement added.

The reopening of the Gatuna border comes three  years after Rwanda shut the crossing, accusing Uganda of  supporting anti-Kigali dissidents, illegal detention, torture and murder of its citizens resident in the East African nation.

Uganda on its part accused its southern neighbour of hostile espionage, infiltrating its security services and sabotage.