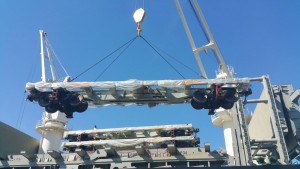 Each of the wagons has a carrying capacity of 60 tons per trip against the current stock which is limited to a 40 ton load per wagon.

Speaking in Mombasa where the new stock was introduced into the fleet, RVR Group CEO Carlos de Andrade said the wagons represented both a quantitative and quality leap.

“We have been limited in the volume of freight we were able to move because of the size and quality of the wagons we inherited, many of which were built more than 30 years ago. For the first time since we took over the concession, RVR will be deploying wagons that are purpose built for modern rail transport operations, both in terms of capacity and their condition,” he said.

Carlos explained further that the new wagons were a lot more cost effective per trip which opens the possibility for the company to reduce freight charges considerably and become a lot more competitive than the overburdened and grid-locked roads.

“We are confident once the new wagons are put into service along with the 20 GE locomotives that recently arrived, we will able to increase the volume of business we are handling. Eventually this will allow us to fully utilize the newly opened inland container port in Mukono which has the capacity to handle 1,644 units at any time and 36,500 containers a year and is expected to play a major role in our business growth,” he added.

Speaking about the impact the new wagons are expected to have on transport and infrastructure on the northern corridor, RVR General Manager, Concession & External Communications, Sammy Gachuhi said, “The additional capacity means the railway is now positioned to even surpass the impressive freight volumes numbers achieved last year. As at 31st January this year, we had moved over 1.8 million Net Ton Kilometers (NTK) of freight against a target of 1.7 million by 31st March in Kenya. The corresponding figures for Uganda were 250 million NTK of freight moved as at 25th February against a target of 250 million by March.”

RVR is midway of its US$ 287 million five-year capital expenditure program on the 2000 km rail network that RVR manages in Uganda and Kenya. Launched in January 2012, the programme represents the single biggest capital investment in rail in the entire East African Community in the past 30 years.

Since the start of the turnaround programme, RVR has invested US$ 126 million in modern rail operating technology, restoration of infrastructure, expanding haulage capacity and critical skills development of its 2,400 strong workforce.

In 2014, the company completed the rehabilitation of the most damaged sections of the railway track between Mombasa and Nairobi and reopened the 500 kilometer railway line running from Tororo to Gulu in northern Uganda after a 20-year hiatus.

RVR claims that installation of satellite tracking and GPS-based technology on all trains has helped shave 6 hours off cargo transit times between Mombasa and Nairobi.