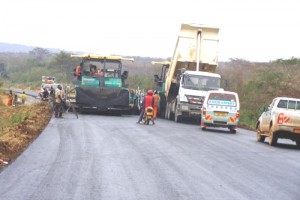 UNRA management is concerned that roads that under normal circumstances are supposed to last 15 years, begin to deteriorate within five years.

March 7—Annual spending on road repairs as result of irresponsible use by mostly drivers of overloaded trucks has reached $64 million and the Uganda National Roads Authority (UNRA) hopes new penalties introduced this year will help reduce this rate of destruction.

“Taking an example of the Fort Portal-Hoima Road (in western Uganda) that was constructed in 2007, but seven years down the road, it is already spoilt and the government is spending a lot of money to repair it. They are many other roads that have been spoilt because of heavy trucks” Reuben Byaruhanga, the Director for Road Infrastructure Protection told a news conference in mid-week.

UNRA was set up in 2006 to oversee Uganda’s road network and at $1 billion for FY2017/18 is currently taking up the bulk of the national budget due to the government’s determination to upgrade major highways and provide new transport  infrastructure in the vicinity of the oilfields in western Uganda.

Speaking at the UNRA headquarters, Byaruhanga said normally Ugandan roads are designed to last for over 15 years. However most last even less than five due to  heavy trucks, sometimes overloaded as much as 100% beyond the acceptable 56 tonne axle load permitted.

The UNRA Vehicle Dimensions and Load Control regulations, that were launched in November 2017, became effective on January 1st 2018. However implementation only began February 5, 2018. The maximum penalty for overloading a vehicle is UGX500 million ($135,000). This is intended to discourage the practice by making the penalty fee clearly outweigh any possible cost benefits to the transporters to overload for commercials gains.

In addition, if the levied fee is not cleared after  three days, an additional charge of $50 per day is added and goods and truck auctioned in the next 60 days. This is aimed at encouraging express penalty payment to avoid trucks being over parked at weighbridges for long hence creating congestion.

“The heavy overloading fee in the new UNRA regulations is greatly guided by the East African Community (EAC) Vehicle Control Act (enforcement measures) regulations which were passed and gazetted in 2016. What this means is that an overloaded truck moving from Congo or Rwanda will face the same penalties. This will increasingly help Uganda as most of these trucks are from neighbouring countries,” Byaruhanga said.

He said the old regulations of 2010 were relatively soft in terms of penalty fees (UGX 600,000 per axle) resulting into many haulage companies willing to overload for the sake of more profit at the cost of a small fine. He said careless destruction also has  adverse repercussions on Uganda’s tax returns, business opportunities and foreign debt.