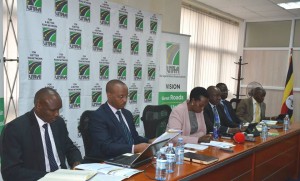 Kagina (third left) said the government was in talks with China’s Exim Bank, but UNRA had already started the procurement process.

July 25—Uganda National Roads Authority (UNRA) is eyeing the government for the $700 million needed to construct 700 kilometres of new feeder roads for the nascent oil and gas industry in western Uganda and a new bridge over the River Nile at Karuma.

Allen Kagina, the UNRA executive director told a news conference, in order for the transport infrastructure to be ready by 2020 when commercial oil sales are expected to begin, construction must start before the end of 2017. However the government has not yet agreed terms for a $600 million loan from from China’s Exim Bank.

“As UNRA we know the discussions are ongoing between Government through the Ministry of Finance Planning and Economic Development, to secure the loan from Exim Bank of China. The funds are highly needed for us as UNRA– the project must commence in the early November of 2017,” Kagina said.

She said UNRA is already undertaking the procurement process in anticipation of signing commercial contacts in November 2017.

“By the commencement of November, UNRA will be signing the commercial deal with contractors to undertake the project if Government secures the funds in time,” she said. Kagina was highlighting the UNRA performance for the financial year 2016/2017 and the proposed projects.

Apart from new roads for the oil industry, UNRA also plans to build a bridge to replace the present one at Karuma Falls on the River Nile. According to sources this will cost about $100 million. The source told 256BN the designs are ready, but waiting for the government to secure the required funds.

Some of the projects which are waiting for commissioning include the Upgraded Fort-portal- Kamwenge to bituminous standard which was financed by the government and Development Partners. The second project was the Ntungamo-Mirama Hills with financing through Trademark East Africa(TMEA). Uganda’s paved road network now stands at 4,257 kilometres.

Kagina said in the financial year under review UNRA took tough decision aimed at saving the government money by terminating contacts of two companies which had fallen way behind schedule.

Kagina said six new bridges were constructed in the financial year including the Apak Bridge in Lira, Manafa Bridge along the Tororo- Mbale Road among others. However she said one of their most serious problems facing UNRA is delays by the government to release the necessary funds and frequent interferences in the procurement process.