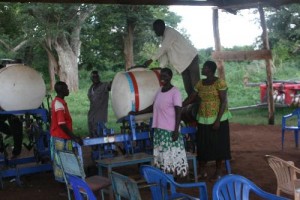 The human resource gap is highest at the sub-county level where many farmers have never heard or seen extension workers.

March 28–Implementation of a 2014 Cabinet decision to direct the agriculture ministry to develop the Single Spine policy, as a way to improve integrate, coordinate and harmonize the public extension system is in trouble.

According to a new policy paper published by the Economic Research Policy Centre (EPRC), Makerere, there is a human resource and financing crisis that must be urgently addressed before the Ministry of Agriculture, Animal Industry and Fisheries (MAAIF) can successfully implement the Single Spine.

In a Single Spine structure there is a single decision-making process from the top MAAIF officials, without subsidiary bodies sharing the final decision about delivery of agricultural extension services.

The Single Spine directive came in after numerous complaints were raised about NAADS inefficiency. Cautioning against repeating past mistakes, the paper continues in part, ‘Moreover, since NAADS’ launch in 2002, there had been a donor ban on further recruitment of any more public extension staff at the district level; accordingly, extension workers who retired, resigned or died were never replaced. As a result, the Single Spine is being rolled out amidst a massive resource gap in extension workers’.

The authors say the Single Spine reform can only become a reality if problems faced by previous agricultural extension systems are urgently handled. Shortages of personnel has forced the government to become flexible including approvals for the recalling of former staff. Based on 2013 figures, the human resource gap is highest at the sub-county level where it was 86%. Out of the 6,952 approved technical positions, only 994 had been filled at the time. In other words, many farmers had never seen an extension worker, let alone benefited from any technical know-how.

‘This calls for increasing public financing for agricultural extension service delivery or exploring new financing options, recruiting more staff to fill the vacant technical positions, expediting the development of a framework for implementing the Single Spine reform, and creating and maintaining good relations among institutions that contribute to delivering extension services to farmers’, the paper states.

Moreover, in order to start implementing the Single Spine reform, it was estimated that MAAIF required UGX 89.4 billion (nearly $25 million) in its first year of implementation; however, only UGX 36.77 billion ($10 million) was allocated for this purpose.

This means that MAAIF experienced a funding gap of UGX 52.63 billion or a general budget shortfall of approximately 59%. The result is that the farmer-to-extension-worker ratio remains high, leading to limited out-reach,  a situation similar to Uganda’s provision of extension services in the past.

During implementation of the Single Spine reform budgetary limitations are likely to hinder the recruitment of adequate numbers of extension workers to serve the growing number of farming households. The authors say extension workers will not be well facilitated, and some critical specialised disciplines (such as entomology and fisheries) might gradually disappear.

They write; ‘These foreseen challenges are synonymous with previous public Unified Extension system (UES) and NAADS approaches as factors that partially hindered satisfactory performance— therefore, they should be mitigated urgently’.

In-fighting is another problem that has plagued provision of extension services. The authors say MAAIF has always seen the NAADS Secretariat as an independent agency when in fact it is not. This perception has often created friction, resentment and fighting between the two institutions.

The friction was partly caused by the fact that NAADS Secretariat was receiving more than 50% of the agriculture sector’s budget, an arrangement that was viewed by MAAIF as unfair and not justified; consequently, some components (like disease control) that were intended to make NAADS a success were never funded.

‘Despite the reforms in institutional structure and mandates, the NAADS Secretariat continues to command the lion’s share of agriculture sector budget (more than 37 %). Its greater financial muscle makes NAADS Secretariat appear more powerful than its mother ministry (MAAIF); hence the friction might persist and constrain the relationship between the two institutions’, the paper states.

The authors continue that unless  MAAIF and NAADS learn to work together all else will fail at the expense of providing farmers with efficient extension services.

Mildred Barungi and Madina Guloba are both EPRC Research Fellows while Annet Adong is a Research Analyst at the same institution.