June 27—Uganda is currently exporting milk and milk products worth a total of $60 million annually, […]

June 27—Uganda is currently exporting milk and milk products worth a total of $60 million annually, but the Dairy Development Authority (DDA) thinks the country’s producers and processors can do better. In 2015, the figure was $50 million. 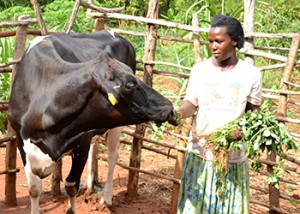 In a report to mark the end of the June Dairy Month, the regulator says the sub-sector is growing at 8% per annum with output rising from 1.5 billion litres in financial year 2013/14 to slightly over two billion litres last year.

Besides the East African Community, Uganda’s main markets include the  COMESA region, parts of the Middle East and South East Asia.

‘The value of exports is projected to rise owing to the increasing demand for milk and milk products in the region and beyond. The main dairy exports are casein, skimmed and whole milk powder, UHT milk, ghee, cheese, butter, butter oil ice cream and yoghurt,’ the DDA says.

One of the country’s most notable producers, President Yoweri Museveni said last year at the official opening of the Pearl milk plant, “Uganda currently generates 2.2 billion litres of milk, but consumes only 800 million litres of the total produce per year.

He said, “We currently generate $50 million per year from milk sales, but with endeavours  like constructing milk processing plants, we shall certainly be making six times of what we are earning now in a few years.”

According to the DDA, to date there are nearly 80 processors and collection centres have been increased from just over 350 to about 440 today.

However, only 33% of the marketed milk is processed which indicates a huge potential for more value-addition on the remaining 67% which is collected in its raw form. By offering some tax incentives, the government hopes it can encourage more investors to go into value-addition for agricultural produce  in milk and other dairy products together with oil palm, oil seeds and cotton.

Other organisations like Heifer Uganda have a more holistic approach that aims to improve rural households on a whole range of indices. But through its parent, Heifer International, it has popularized dairy farming across the country through its ‘living donation’ concept.

The DDA is a statutory body under the Ministry of Agriculture, Animal Industry and Fisheries (MAAIF), that was created under the Dairy Industry Act of 1998 with the mandate to develop and regulate the dairy industry in a sustainable manner. DDA traces its roots to the Dairy Master Plan of 1993.

In its latest directive, the DDA has asked all producers and processors to provide it with monthly returns on a regular basis.