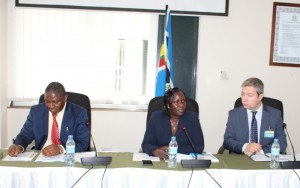 Eriyo said the report raised the question of whether the EAC governments were moving in step with the manufacturing firms.

July 26—East African Community (EAC) manufacturing firms have managed to increase their intra-regional exports in some items, but various constraints have caused them to lose market share to India for key products like pharmaceuticals; China for fertilizers, iron and steel products and Malaysia for fixed vegetable oils.

This is one of the key findings in the EAC’s first regional Industrial Competitiveness Report 2017, which will be released to the public in either late September or early October 2017. An initiative of the EAC Secretariat based in Arusha, the report will also show how regional governments have frequently been a source of frustration rather than assistance in the industrialization of East Africa.

The South Korean government footed the bills while consultants from the United Nations Industrial Development Organisation (UNIDO) did the leg-work in putting the report together. However this has been done with cooperation of several public and private entities around the region. The EAC is made up of Burundi, Kenya, Rwanda, South Sudan, Tanzania and Uganda with a total population nearing 150 million people and a GDP of over $146 billion.

Last week, Jesca Eriyo, the EAC Deputy Secretary General (Finance and Administration), told a stakeholders workshop convened to discuss the findings, the report was part of the EAC-UNIDO Programme for Strengthening Institutional Capacities for Industrial Policy Management, Monitoring and Evaluation.

She said the Community had made good progress in its integration road-map. The market enlargement arising from the Common Market had also created immense opportunities for doing business, and especially for increasing production, diversification of economic base, realization of economies of scale; and finally opportunities for accelerating industrialization in each Partner States and the EAC as a whole.

“However the capacity and performance of the public sector that deals with industry related matters was generally low, and as a result, implementation of industry related policies and strategies had in some cases been inadequate, constrained by a number of factors, including inadequate industrial governance systems as well as weak monitoring and evaluation frameworks,” she said.

Eriyo said other issues that need to be addressed to foster and sustain industrial growth include inadequate capability to design,  implement and monitor policies and strategies; challenges to enhance private sector participation; and inadequate  systems for collecting, processing, storing and dissemination of  industrial information, among others.

Andrea Antonelli from UNIDO’s Research and Industrial Policy Advice Group, said the main objective of the report was to provide a compass to policy-makers, the private sector, and generally a wider audience of stakeholders interested or involved in industry on the broad direction of the industrial development trajectory of the EAC.

Eng. Steven Mlote , the EAC Deputy Secretary General in charge of Planning and Infrastructure, criticised the huge amount of resources that the Community is losing in exporting raw materials, leading to the loss of job and investment opportunities. He said the region must work together in developing the manufacturing sector rather than competing against each other.

The EAC Principal Industrial Economist, George Ndira said industrialization should be a concern for the EAC Secretariat and it (Secretariat) should continue advocating for industrialization as it is the surest way to lift Partner States’ economies from the dependency syndrome and help in pulling millions of the population from poverty.

He said, “This workshop is an opportune moment for all us to understand where we are and how much distance we are yet to cover to get to a stable state for long-term economic prosperity.”