Home » Finance » Markets » Regional garment makers to get US help

Regional garment makers to get US help 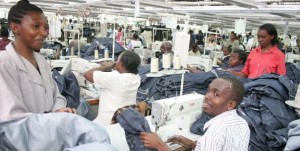 The Americans want African garment exporters to adopt best labour practices if they want to sell in the US.

February 24–Garment makers in the region will find it easier to sell in the United States market following a new deal between the American Apparel & Footwear Association and the East Africa Trade and Investment Hub, a go-between which is overseen by USAID with offices in Nairobi.

The ‘East Africa Cotton, Textile and Apparel Initiative’ was signed at the African Pavilion on the sidelines of the MAGIC trade show in Las Vegas.

Apparel accounts for 90% of non-oil exports of African trade to the US under the African Growth and Opportunity Act (AGOA) and is a key sector in East Africa in terms of employment and growth potential.  East Africa has become a focal point for African sourcing. Since 2001, AGOA has enabled selected African countries duty/quota-free access to the US market. In 2015, the US Congress extended it to 2025.

The plan is to have sustainable workforce development programmes and institutionalise environmental, social, labour and worker safety best practices in the region. Put bluntly, the Americans do not want African factory owners to use unfair labour practices, like ridiculously low wages and poor working conditions, to make clothes destined for the US.

In  joint statement the two parties state, ‘The agreement will provide many benefits to apparel, footwear and travel goods companies by cutting red tape at the borders and increasing supply chain transparency and decreasing costs. The benefit will pass along value to the American consumer and potentially add to the four million Americans already working in the industry. The agreement is  a major breakthrough for the future of international trade.’

Supporters of the partnership say that in the first three years, some 45,000 jobs will open up across Ethiopia, Kenya, Rwanda, Tanzania, and Uganda. The arrangement is also expected to create jobs and further growth in the US apparel, footwear, and travel goods sector.

The Hub will help East African governments and private companies  to take up the best practices and standards that American apparel, footwear, and travel good sourcing companies require.

East Africa Trade and Investment Hub (the Hub) is a one-stop shop in the East African region for businesses and national governments seeking to take advantage of AGOA. The Hub supports Ethiopia, Kenya, Madagascar, Mauritius, Rwanda, Tanzania, and Uganda to increase their exports to the US through AGOA.

By the end of the project, the Hub expects to increase non-oil exports to the US by 40%.  US retailers and East African businesses will both benefit from the initiative. ‘Working in tandem with East African governments to raise industry standards, promote job creation, and increased trade and investment will ensure a win-win for trading partners’, the Hub said in a statement.