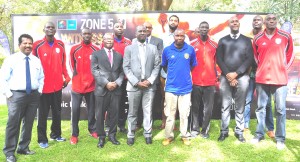 Ogong (front row left), lines up with officials from City Oil, the parent company of the City Oilers basketball team, after announcing the sponsorship deal for the Africa Zone 5 Club Championships in October.

September 21—Stanbic Bank Uganda (SBU) has climbed aboard the high-profile sponsorship bandwagon that is helping to make basketball one of the most popular spectator sports in the country.

Daniel Ogong, the SBU Head of Marketing said, “We are proud to be associated with such likeminded corporate companies who have a great belief in the development of sports and its power to transform lives.”

Ogong said, “Ugandan teams, especially the Oilers, have performed very well in this tournament in the past and I am confident this run will continue. I encourage Ugandan basketball fans to come out and support the Oilers as they defend their title against what is certain to be very stiff opposition.”

The tournament, which takes place during the first week of October at the Lugogo Indoor Arena, will bring together 19 teams from eight member countries namely Uganda, Kenya, Rwanda, Burundi, Egypt, Ethiopia, Somalia and Tanzania.

The hosts City Oilers will be staging a defense of the men’s title which they won in Dar-es-Salaam last year while Kenya Ports Authority (KPA) will defend the ladies crown.

City Oilers was founded in 2011 and got promoted to the first division in the same year, before going on to win the division and gain promotion to the NBL at its first attempt. The Oilers won the NBL in their inaugural season in 2013 and have won the league every year since.

Uganda last hosted the tournament in 2013 which was won by Rwanda’s Espoir and Kenya’s Eagle Wings in the men and women’s categories respectively.

The winners of both categories qualify for the Champions Cup of Africa (ACC) and the Oilers’ target, the men’s edition, will be hosted in Casablanca, Morocco in December.