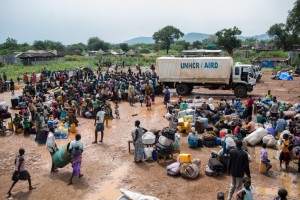 Uganda is  hosting over a million refugees, most of them fleeing violent conflict in South Sudan.

May 9- Recognition of Uganda’s exemplary way of handling migrants and refugees made Kampala the logical choice for the Third Pan African Forum on Migration scheduled for May 15-17.

Next month, President Yoweri Museveni, together António Guterres, the United Nations Secretary General, will also host the UN Solidarity Summit for Refugees, an event fixed on raising awareness and cash for the displaced millions around the world.

Uganda is a considered a global model in allowing refugees to integrate in society and earn a living unlike other countries that confine them to camps.

“The Forum is designed as part of the regional consultations for the Global Compact on Migrants and Refugees and is intended to bring in national and regional perspectives and best practices of all relevant stakeholders including Senior Governments officials from relevant ministries responsible for foreign affairs, development, justice, home affairs, immigration, humanitarian response, climate change, etc. for a whole of government approach,” Obiga Kania the Minister of State for Internal Affairs said.

The talks will run under the theme ‘Towards a Common African Position on the Global Compacts on Migration and on Refugees’.

Participants are expected to come up with a Draft Common African Position on Migration and on Refugees based on existing continental and regional normative and legal frameworks on migration and refugees.

Uganda is now home to more than 1.2 million refugees. The country continues to receive approximately 2000 refugees a day with the continued instability in South Sudan caused by armed conflict with the spin-off being mass famine.

In launching preparations for the Solidarity Summit which aims to mobilize new funding t cater for refugees,  Prime Minister Dr. Ruhakana Rugunda said although Uganda has had a history of accommodating refugees, as a host country it should not be burdened beyond capacity.

He said despite the government’s open policy towards refugees, the continued influx is putting pressure on the economy and the environment.

The 1951 Geneva Convention relating to the Status of Refugees obliges signatory states to protect individuals who flee their countries of origin to escape persecution based on race, religion, nationality, membership of a particular social group or political opinion. The Convention recognizes that a large influx of refugees may overburden individual host countries and calls for international cooperation under such circumstances.

However, there are no rules for distributing refugees across signatory states or for sharing the economic cost of hosting refugees.2 Recently, the New York Declaration has again called for more equitable sharing of burden and responsibility, to be achieved through a new global compact on refugees by 2018.

In many host countries, the legal status of refugees is insecure and does not permit their social inclusion and access to employment and entrepreneurship.