April 11, 2018 – The signing of a Project Framework Agreement between Uganda and Albert Graben […] 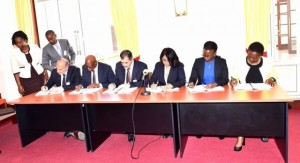 April 11, 2018 – The signing of a Project Framework Agreement between Uganda and Albert Graben Refinery Consortium, a consortium led by General Electric, removes the last bureaucratic obstacle along the dogged road to oil production in the country. The parties that first initialled the agreement on March 28, yesterday signed the agreement

AGRC will construct a 60,000 barrels-a-day refinery in Hoima, the heartland of Uganda’s nascent petroleum industry. The consortium will design and finance construction of the plant, currently costed at an engineer’s estimate of USD 4 billion. Construction is expected to commence in two years’ time.

“The refinery will be developed as a commercial undertaking with focus on supplying products like gasoline, diesel and heavy fuel oils to the regional market,” energy minister Irene Muloni said during the signing ceremony at State House Entebbe.

AGRC is made up of Mauritius-based companies Yaatra Africa and Lionworks Group Ltd., Italy’s Saipem SpA, General Eledtrick and the National Oil Company.