April 27, 2018—Building of the proposed $4 billion refinery in western Uganda by the Albertine Graben […]

April 27, 2018—Building of the proposed $4 billion refinery in western Uganda by the Albertine Graben Refinery Consortium (AGRC) will create direct and indirect employment for an estimated 40,000 to 50,000 people. 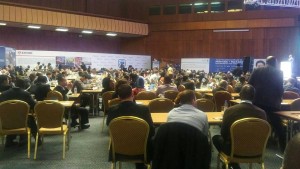 Karuhanga said this year’s convention is the last in the run-up to Uganda’s First Oil.

According to Shearman & Sterling, the law firm that drew up the Project Framework Agreement recently signed between the government and AGRC, construction will also mean the transfer of both skills and technology to Ugandans.

To date, various exploration surveys have shown that Uganda has some 6.5 billion barrels of crude of which between 1.5 billion to two billion is recoverable.

AGRC is made up of YAATRA Ventures, Baker Hughes, (a GE company), LionWorks Group and the Italian engineering firm, Saipem.

Ado Oseragbaje, who is  Baker Hughes Vice President, Sub-Saharan Africa said, “The government’s selection of our Consortium as preferred bidder is a testament to the collaborative efforts of these best-in-class enterprises leveraging each other’s strengths to produce a solutions-focused proposal. When executed, this will help develop the industry infrastructure and provide livelihood for the Ugandan people and, by extension, other East African countries.”

The Consortium will have each member undertake a specific role during Pre-Final Investment Decision (Pre-FID) Activities and Engineering, Procurement and Construction (EPC) of the refinery.

Maurizio Coratella, Saipem E&C Onshore Division Chief Operating Officer said, “The selection of AGRC will allow the development of a robust proposal leveraging both financial capabilities of YAATRA Africa and LionWorks and the technical resources and expertise of Saipem and Baker Hughes GE, addressing the Government’s expectations for the growth of the energy sector. We are pleased to have been selected to help Uganda delivering this project.”

While officially opening the Fourth Annual Oil and Gas Convention on Wednesday, Robert Kasande, the permanent secretary in the energy ministry said the government is still committed to producing oil by 2020 and has put in place all the regulations needed to promote local content and see that as many Ugandans as possible benefit from the oil sector.

The two-day Convention was organised by the the Uganda Chamber of Mines and Petroleum (UCMP) together with the Ministry of Energy and Minerals Development.

UCMP chairman, Elly Karuhanga said that this convention is the last one before Uganda finally kicks start oil production.

“The story of oil and gas began as a rumour, then it seemed impossible to get. The regulations were made to get it. Then it looked as if technology hitches could not be overcome. They have been overcome. We are already on the set and ready to take off anytime from now,” he said.

Inward investment to the country’s  budding oil and gas sector is projected to be anywhere between $10 billion and $15 billion over the next decade.

Kasande said the government has also invested heavily in major infrastructure like roads and an airport to help investors easily access the oil.

Karuhanga asked Ugandans to use this chance to make useful connections that will help them to participate and benefit from the oil sector. He however cautioned that although Uganda is focused on exploiting local content, there is need to be mindful of the quality of their services and products

“The standards of the goods and services offered by the Ugandan suppliers must be world class, for them to stand a chance of landing oil industry contracts,” Karuhanga said.