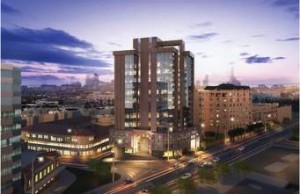 June 19, 2018 – Design and function, rather than a soft retail market are responsible for the low occupancy rates in Kampala’s recent commercial real estate developments.

From Kisementi (Cooper Road Kololo) to Charmi Towers in downtown Kampala, developers are staring at empty space as tenants keep off. While Acacia Mall suffered momentarily after the collapse of Nakumatt Supermarket, footfalls have since recovered and secondary tenants stayed put after Shoprite moved in.

Occupancy rates for the retail space at The Cube and Charmi Towers among others are trending at less than 10 percent. Flexible asking rates have done little to help matters.

While many developers are heaping the blame on a significantly weakened retail market, Mr. Moses Lutalo, the Country Manager for Broll Properties differs.

“The Uganda retail sector is not anywhere near apocalypse. International retailers such as Carrefour and Shoprite have on the contrary grown their appetite for this market,” he says arguing that systematic challenges have greatly contributed to the low occupancies at distressed malls.

“A lot of it has to do with design, convenience and location. We need to appreciate the fact that a lot of shopping mall success depends on the design, location and ability to manage the mall professionally to attract the right spend,” he says.

Lutalo adds that the market still lacks prime Grade A, office space and developers with the right sites stand good prospects in the medium to long term.

“Retail on the other hand should be looking at suburban malls in upcoming residential nodes say 7 -10 km away from the CBD,” he says.

Equity Bank has announced a move to take its headquarters to Church House along Kampala Road where it will be occupying four levels. Unlike its catholic counterpart Mapeera House which was developed expressly for corporate use, Church House is a mixed use development offering retail and commercial office space.

Lutalo says this de-risks the project to some degree and with the right leasing and managing agents, it should get some traction.