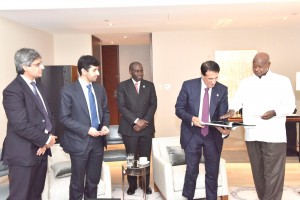 The New York meeting gave a chance for Museveni to catch up on matters discussed during his own visit to Doha earlier this year.

September 19—A delegation under the auspices of the Qatar Investment Fund have expressed interest in Uganda’s  electricity, agro-processing industries and the hospitality business.

Led by the Fund’s CEO Sheikh Abdulla bin Mohammed bin Saud al-Thani, the delegation met President Yoweri Museveni over the weekend on the sidelines of the opening session of the 72nd United Nations General Assembly in New York City.

Museveni told them Uganda is fast becoming a middle-income country with vast investment opportunities in agro-processing, industrialization and the service based sector.

“Uganda is moving towards becoming a first world country based on four sectors; commercial agriculture, industries, services and ICT,” Museveni was quoted by the Presidential Press Unit.