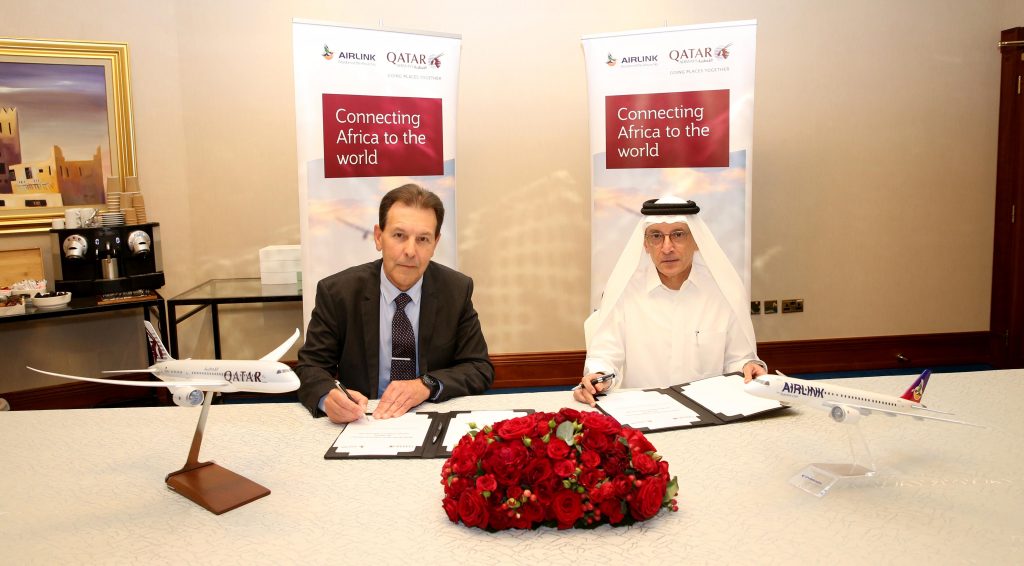 A new codeshare agreement between Qatar Airways and Airlink expands the Middle-Eastern carrier’s reach into Southern Africa while the southern African regional carrier extends gets access to a global network on three continents.

With the codeshare, passengers will be able to purchase connecting flights on both airlines using a single reservation to destinations in the U.S, Europe and points across Asia like Manila, Jakarta and Cebu. The agreement also increases Qatar Airways’ footprint in southern Africa, with improved access to destinations such as Ggeberha (Port Elizabeth) Hoedspruit, Skukuza, George in South Africa and beyond to Botswana, Namibia, Zambia, Zimbabwe and Mozambique.

Qatar Airways’ Group Chief Executive, His Excellency Mr Akbar al Baker said expanding the carrier’s network with Airlink “gives our customers more choice of destinations and flights, that we hope will contribute to the rapid recovery of travel, which plays such an important role in southern African economies.

“We have boosted our presence in the African market by adding eight new destinations since the start of the pandemic and fostering partnerships such as this dynamic agreement with Airlink which will greatly enhance our offering to our customers and support travel and trade” he added.

The eight new routes included Luanda, Harare and Lusaka while the airline will resume services to Windhoek later this month, dovetailing with Airlink’s already regional network via eight gateways in the region.

Rodger Foster, Airlink’s Chief Executive described the partnership with Qatar as “an endorsement of Airlink’s relevance to providing air access to the entire region through our expansive network of destinations, which when considered in conjunction with Qatar Airways’ global reach creates unparalleled connectivity opportunities.”

The new code share flights are available for sales and will commence travel on the 06 July 2022 subject to government approval. The codeshare complements Qatar Airways 35 direct flights a week between Doha and Johannesburg, Cape Town and Durban.

Qatar Airways was the only carrier to continue services to southern Africa during the pandemic and its immediate aftermath, allowing for the movement of goods, medicines and essential travel between the region and the rest of the world.