April 13–Qalaa Holdings, an African leader in energy and infrastructure, has highlighted the improving economic prospects […] 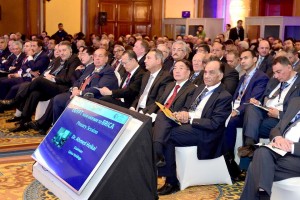 The Belt and Road Industrial and Commercial Conference had participants representing 65 countries who focused on boosting economic cooperation.

April 13–Qalaa Holdings, an African leader in energy and infrastructure, has highlighted the improving economic prospects of Egypt and the role the country plays as an investment gateway for any opportunities available in rest of the continent. In East Africa, Qalaa Holdings is best known for their majority stake in Rift Valley Railways (RVR).

“We are still firm believers in Africa’s long-term growth prospects. Investors who are willing to be patient and invest in the infrastructure that will deliver sustainable growth in Africa will reap the long-term benefits. Egypt plays a vital role in the development of the African continent, and we expect this role to grow in the future on the back of signed agreements between Egypt and African nations,” Ahmed Heikal, the Qalaa Holdings Chairman and Founder said in a keynote speech at Belt and Road Industrial and Commercial Conference (BRICA) in Cairo.

He said, “These agreements will have a positive impact on the future of Egyptian-African cooperation in strategic sectors of the economy such as energy and agriculture. By virtue of its geographic location and historic inter-continental ties, Egypt is the ideal hub for both investing and exporting to Africa.”

‘One Belt, One Road’ is an initiative launched by Chinese President Xi Jinping in September 2013 as a long-term plan to boost economic, trade, and cultural ties between China and more than 65 countries spanning three continents, from Asia to Europe via Southeast Asia, South Asia, Central Asia, West Asia and the Middle East.

The event was organized by the Egyptian Businessman’s Association (EBA) and the China Federation of Industrial Economies (CFIE) under the patronage of Tarek Kabil, Egypt’s Minister of Trade and Industry.

Heikal said, “As an Egyptian investor I’m proud to be here today to deliver two important messages. The first is that Egypt is heading in the right direction in terms of investment climate and the second is that Egypt by virtue of its strategic geographical location is an important hub for investing in and exporting to Africa. For the first time in a long time, Egypt is embarking on a very bold reform program that includes the gradual removal of energy subsidies, the liberalization of foreign exchange, and changes to the legal framework that represents the central core of investing. Additionally, there is also a new sense of fairness that exists within its bureaucracy, which is extremely important,” 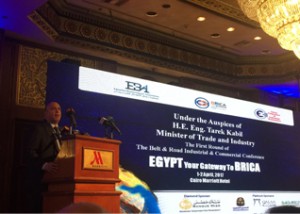 Heikal said Egypt is an important hub for investing in and exporting from Africa.

Qalaa Holdings controls subsidiaries in industries including energy, cement, agrifoods, transportation and logistics, and mining. The company is currently involved with a $ 3.7 billion Greenfield petroleum refinery project in the Greater Cairo area. On completion, it will deliver 4.2 million tons of refined products per year to the local market, including 2.3 million tons of Euro V diesel representing more than 50% of Egypt’s current imports.

“I think it’s safe to say that we are cautiously optimistic about Egypt’s future prospects. With the recent government reforms, an improvement in our production of gas and petrol, decreasing imports by virtue of the new exchange rate, increasing exports, an improvement in tourism and a gradual return in FDI, Egypt’s economy is headed in the right direction. Qalaa has always been a believer in Egypt’s competitive advantages and thus we have invested in more than 30 African countries over the years,” he said.

During a panel discussion, Qalaa Holdings Managing Director Karim Sadek said, “Qalaa has over the years invested in crucial sectors on the African continent including the development of African railway infrastructure in Kenya and Uganda, river transport in Sudan and South Sudan, mining and the production of alternative solid fuels in Ethiopia, and cement manufacturing in Sudan.”

He said, “African governments are now more supportive of private sector investors and are working efficiently to provide the proper regulatory framework and stability required for them to stay the course and continue investing in strategic industries such as power generation and distribution, petroleum refining and transportation mega projects.”