The Ministry of Works is wading deeper into a legal conundrum, after it extended by a […]

The Ministry of Works is wading deeper into a legal conundrum, after it extended by a further three months, the suspensions of the former management team at flag carrier Uganda Airlines. The development has caused consternation among the affected officials, with some now considering legal action to salvage their careers and sullied reputations.

In letters written on August 20, Permanent Secretary Mr. Bageya Waiswa, informed the officials who have been under suspension since May, that they would have to wait another three months before disciplinary proceedings against them are concluded.

“Reference is made to the letters Ref TRP250/1 of 21st May 21 and TRP 250/1 5th August 2021 on your Suspension from duty and Alleged Mismanagement of Uganda National Airlines Company Limited respectively.

“This is to inform you that your suspension from office has been extended by another 3 months to facilitate the conclusion of investigations and disciplinary proceedings,” reads the brief two paragraph letter that was circulated to individual managers. 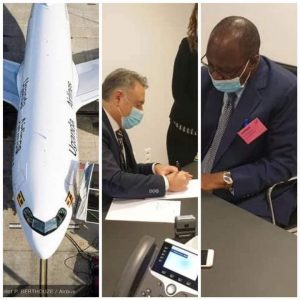 Mr. Bageya’s action is in direct conflict with national labour law and aspects of the Uganda Airlines Human Resources Manual. Section 63(2) of the Employment Act caps suspensions at four weeks. It specifically states that “any suspension under subsection (1) shall not exceed four weeks or the duration of the inquiry, whichever is the shorter.”

Section 62 (4) of the same Act, also says an employee may not be suspended from work for more than 15 days in any six months period while subsection (5) says barring exceptional circumstances, an employer who does not commence disciplinary proceeding against an employee within 15 days of becoming aware of the event occasioning disciplinary action, will be deemed to have forfeited the right to pursue the same.

On the other hand, Chapter 16.9 (b) of the Uganda Airlines human resources manual provides that a suspended employee shall receive half-pay for one month and full benefits after one month. 256BN understands that the suspended officers have continued to receive only half their benefits beyond the stipulated one month.

Speaking to this news site, Mr. Bageya said that the need for a through investigation and fair process, overrides the limitations imposed under Section 63 (2).

According to sources familiar with the situation, the management and the ministry are in a tight spot because the orders to suspend the board and the senior management figures and officers, were externally generated. Acting on claims of irregularities by Ms Joy Kabatsi, the junior minister for works in charge of the airline at the time, President Museveni ordered the suspensions of Board Chair Perez Ahabwe along with his six board-members and chief executive Cornwell Muleya on April 30. Five top managers were also sent on a three-months suspension. Another set of managers including two pilots and the Commercial Director would follow later in May.

The suspensions of the executive team were initially described as compulsory leave that had been accumulated over time by the officials in question. But weeks later, President Museveni accused them of mismanaging the airline and the board of indulging in a range of malpractices including recruitment and procurement fraud.

These allegations and the delay to resolve them, has raised concern among the non-executive board members from the private sector, who feel that the drawn-out dispute could negatively impact their career progression.

“Imagine a situation where you are passed over for promotion because of allegations that you might have had nothing to do with and yet nobody is in a hurry to clear your name,” one commentator said.

This news site has it on good authority that they are contemplating commencing legal proceedings against the airline and the Ministry of Works. The contemplated legal action would directly target Gen. Edward Katumba Wamala, the Minister for Works and his Permanent Secretary Mr. Bageya Waiswa, who have over the past five months signed various correspondences addressed to the affected officers. As legal advisor to the government, Attorney General Kiryowa Kiwanuka would also be drawn in as a respondent.

The legal complications surrounding the suspension came to light recently, after Ugandan media reported on a letter in which the Attorney General had advised the Ministry of Works that they did not have powers to suspend the board. Their actions had also not followed the procedures for effecting such a suspension. The other complication is that the suspended senior managers are supposed to answer to the board which is no longer in existence.