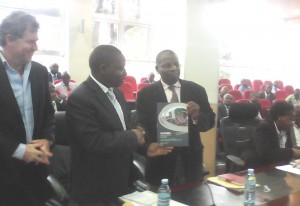 “Most of Uganda’s economic challenges are due to poor implementation of public projects due to corruption tendencies and lack of capacity by some government agencies. We are positive that if the private sector gets more involved in the infrastructure sector development, there will be more efficiency in these projects as well as economic development,” he said

Rachael Sebudde, the Task Leader for Uganda’s economic update team said although the country aleady has legal provisions for Public-Private Partnerships (PPP), there was still a lack of an institutional, including capable human resources and laid out methodologies, to implement successful PPPs.

She said; “ The PPP program has been slow to take off, because the government is not giving it the urgency necessary to make it work efficiently. We ask the government of Uganda to put in place all the necessary institutions as well as laws that will make this work, because it is the most appropriate approach to Uganda’s financing problems,”

According to a Economist Intelligence Unit evaluation done in 2015, Uganda was ranked 8th out of 15 African countries in terms of maturity of procurement processes related to PPP, lagging behind Kenya and Tanzania. However Uganda scored better in PPP contract management processes.

According to the World Bank report Infrastructure finance deficit:Can public-private partnerships fill the gap?  Uganda has great fiscal space to increase PPP’s in the future more than Kenya and Tanzania because of its relatively low debt-to-GDP ratio.

The World Bank says the country loses an estimated $300 million annually in poorly planned infrastructure development programs. Although in recent years,  the government annually spends over $1 billion on infrastructure, there is still limited impact, because a big chunk of the money is wasted in inefficient spending.

Kibirige said the money is lost through under-pricing and the inability to finish projects within the estimated costs and schedule as well as corruption. “The government of Uganda is still in project implementation hence the inability to appropriately allocate funds for public infrastructure project. In the end, projects are always delayed and most times, there is need for additional finances,” he said.

“We recommend that the government of Uganda leverage private resources through public-private partnership as to improve on the levels of efficiently developing and implementing projects,” Kibirige said.