July 31—The general public has been given a toll-free number to call in case they come across suspected sub-standard goods. 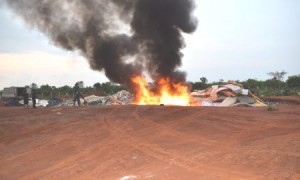 The items weighing about four tonnes were destroyed in controlled fire recently.

John Paul Musimami, the Uganda National Bureau of Standards (UNBS) Deputy Executive Director in charge of Compliance said recently, “We shall continue to seize substandard products on the market and prosecute traders involved in illicit trade. I would like to urge the public to be vigilant and report suspicious goods on the market to UNBS via our toll free line 0800133133.”

This is part of an intensified fight against sub-standard goods and followed countrywide seizures carried out by the UNBS Market Surveillance team and the Criminal Investigations Department of the Uganda Police Force. The items which weighed in at about four tonnes included foodstuffs, baby powdered milk, cement, sanitary towels, cosmetics, electronics, steel and steel products, among others.

According to the UNBS Deputy Executive Director in charge of Compliance, John Paul Musimami, the destruction is part of UNBS’ effort to protect consumers from substandard products.

He said, “Substandard products are not only dangerous to the health and well-being of consumers, they are also a threat to the economic development of our country. Our role is to promote fair competition, enhance competitiveness of local industries and protect health and safety of Ugandans and the environment.”

The manufacture or sale of sub-standard products is a criminal offence under the UNBS Act Cap 327, Laws of Uganda. Regular market inspections are carried out by the UNBS to ensure that traders are selling quality products in right quantities. Any substandard goods found on the market are seized by UNBS Market Surveillance inspectors, but frequently UNBS operations are hampered by lack of adequate funds which also affects the Bureau’s capacity to hire and train surveillance personnel.

UNBS, last year, inspected 1,090 business outlets and seized goods worth UGX6 billion (about $1.6 million) including solar panels, primary batteries, percolators, sockets, compact fluorescent lamps, tiles, blenders, among others, but sources say a big percentage of these counterfeit items still get onto the market and are bought by gullible people. Goods also continue to be imported into the Ugandan market by smugglers through porous borders and entry points where UNBS has no presence.