November 14—The Eastern and Southern Africa Trade  and  Development  Bank, commonly  known as the PTA Bank, […] 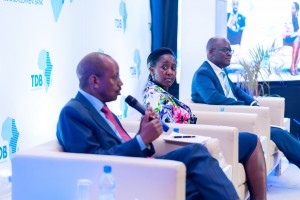 Muhakanizi, the current TDB Board Chairman, explains a point during a news conference with Kamari and Bbosa looking on early this week.

November 14—The Eastern and Southern Africa Trade  and  Development  Bank, commonly  known as the PTA Bank, has re-branded to become the Trade Development Bank ( TDB).

“Our new name will help us to achieve the bank’s objectives  among which is spearheading trade among our member states. Our re-branding  represents rejuvenation and re-commitment to innovate and play a more active role in promoting trade,” Mary Kamari, the Director for Corporate  Affairs said during a news conference in Kampala early this week.

TDB is the financial arm of the 20 member Common Market of Eastern and Southern Africa (COMESA) with its headquarters in Bujumbura, Burundi and  regional offices in Harare, Nairobi and Ebene in Mauritius. Assets are now close to $3 billion.

She said, the re-branding  follows  several  years of  improved  asset  quality, healthy  profitability and  innovation on the back of a series  of institutional reforms  aimed at  strengthening  and  modernizing  the bank.

Admassu Tadesse, the bank’s  Chief Executive Officer/President said they have dramatically increased  their capacity  to meet  the rising  demand  for the bank’s products  and services  from their customers both from governments and the  private sector.

Keith Muhakanizi , the Permanent Secretary in the Ministry of Finance Planning and Economic Development said the bank has been very supportive to Uganda.

“The bank has been very supportive to the government of Uganda. Recently we secured $200 million in loans which we have used to improve infrastructure in  Kampala city  among other ongoing projects across the country,” he said. Muhakanizi is the currently chairs the TDB board. The bank was  set up in 1985.

TDB membership is  also open to non-COMESA states, non-regional countries as well as institutional shareholders. In 2014, China became the first non-regional shareholder in the bank. The bank offers a broad range of products and services, across both the private and public sectors, including debt, equity and quasi-equity as well as guarantees. TDB investments cut across agriculture, trade, industry, infrastructure, energy and tourism, among others and are made on a commercial basis and sustainability principles.

Explaining on what has helped the bank to sustain itself, Kamari attributed this to strong relationships between the bank and its funders. The African Development Bank and the World Bank through its private sector arm the International Finance Corporation are major partners to TDB.

Kamari said,  “As TDB, we have built strong relationships with our funders, especially those willing to finance long-term loans. This has helped the bank to offer quality long term financing loans to our clients. We are also seeing our shareholders base increasing by more than 50% in recent years.”

The Director of Portfolio Management, Wycliffe Bbosa, said TDB will continue supporting both governments and the private sector among its member’s countries. “At TDB we are committed to finance government projects especially infrastructure development such as power, roads which are crucial in supporting economic growth among our member’s states,” he said.

In  Uganda’s case, the bank extended loans to two firms Kampala Cement, and Abacus Pharmaceuticals. The bank offered loans totaling to $9.1million to Abacus to construct state-of-the-art plant in Mukono, along the Jinja Highway while Kampala Cement used the TDB loan to increase output to a million to tonnes annually.