January 23—Patrick Bitature, who chairs the Private Sector Foundation Uganda (PSFU), has asked the government to […]

January 23—Patrick Bitature, who chairs the Private Sector Foundation Uganda (PSFU), has asked the government to expand the tax base instead of overburdening formal businesses who have become easy targets for revenue collectors. Uganda’s large informal sector contributes just a fraction of the annual returns from businesses. 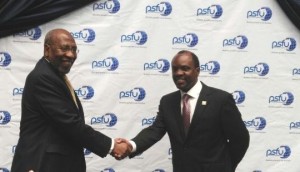 “There is need for the government to find ways of increasing the tax base so that the revenue body doesn’t keep over squeezing the small tax payers it has on its register to finance the heavy government budget,” Bitature said during an event to mark the re-branding of PSFU.

He said the private sector, especially formal businesses continue to suffer because of heavy and multiple taxes that are imposed on them by Uganda Revenue Authority (URA) . He said this trend has limited formal private sector growth.

Guest of Honour,  Prime Minister Dr. Ruhakana Rugunda said the government was looking for ways to bring on board more tax payers so that the few businesses are not squeezed out of business by over taxation. “What we want as Government, is to help businesses grow and bring more taxes to Uganda. It is not our intention to fail businesses especially by imposing heavy taxes on them. I agree that our tax base needs to be expanded,” Dr. Rugunda said.

Founded in 1995, the PSFU is Uganda’s apex body for the private sector. It is made up of over 200 business associations, corporate bodies and the major public sector agencies that support private sector growth.
URA is involved in roping in more revenue from the informal sector, however according to a 2017 joint World Bank/Uganda Bureau of Statistics report (Enhancing Economic Development and Job Creation in Greater Kampala), much of the informal sector is not a good target for taxation. Most businesses are too small to owe business income tax and are unlikely to grow to that level.
The report’s authors discourage trying to ‘formalize’ informal workers as a way to raise local tax revenues. Rather, it suggests a need to create more work in high-productivity sectors such as manufacturing, and to offer training to move informal workers into these jobs.
Bitature asked the government to review the local content policies in place because they are inadequate for the prevailing circumstances. However, he appealed to the private sector to reinforce themselves and play leading roles in sectors like housing, energy, clean water to complement the government’s efforts.

“It is our role to make sure that Uganda becomes a country that we are all proud of. Feeding our children, constructing decent housing for our people so that they live a dignified life. Uplifting our people from poverty is a responsibility for not only government but all of us. We cannot always depend on the foreign aid for everything” Bitature said.

According to the PSFU executive director, Gideon Badagawa said there was a strong need for re-branding as a way to refocus the private sector’s energy on transforming the economy which continues to suffer.

He said despite the efforts by the government and the private sector, Uganda carries a huge trade deficit presently at $3 billion, low domestic revenue, human capital underdevelopment and youth unemployment which is at 60%. The financial market remains weak characterised by low savings, weak uptake of insurance products, currently at 1%.

“We want to find a way on how the private sector can reorganise itself to improve the capacity of these sectors. Our next aim is going to be building a strong membership so that we can be able to work together through a collective norm to refurbish this economy,” Badagawa said.