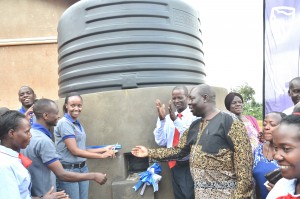 Patricia Musiime and George Mubiru, the Bbira Primary School headmaster cut the ribbon together while excited teachers and pupils look on.

November 13—Staff of Stanbic Bank Uganda’s Operations Division have visited the government-aided, Bbira Primary School in Wakiso District and made a UGX 10 million donation towards construction of a tank to improve water sanitation.

Part of the money will also be used for necessities such as clothes and shoes to improve the welfare of the  children. Patricia Nshemereirwe Musiime, Stanbic Bank’s Head of Operations, said education is a key pillar in the bank’s Corporate Social Initiative programme.

She said, “A good education can only be achieved through a better and friendly learning environment, sanitation being one of the core elements. As a bank, we believe a fully supported education ecosystem in our communities is enabled not only through the class room but also elements such as safe water and health sanitation which contribute to empowerment and prosperity.”

She said, “We believe supporting education in its entirety enables achievement of a universal primary education and in the long run leads to development of the community.”

Established in 1930, Bbira Primary School is a government-funded school with a population of 1,054 students including both a teaching and non-teaching staff of 20.

In 2012, the Water and Sanitation Programme reported that the impact resulting from poor sanitation and hygiene cost the economy of UGX 380 billion (US$ 177 million) per year, or the equivalent of 1.1% of annual Gross Domestic Product (GDP). 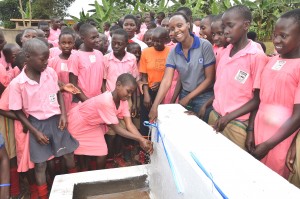 Commenting on the contribution, the school’s head master, George William Mubiru Salongo said as a government-funded school that receives approximately UGX 10 million annually, additional financial support is always welcome. “We appreciate Stanbic Bank for taking the initiative to support education in all possible aspects, more importantly as we seek to ensure a wholesome education for children. We are confident that this contribution will make an extremely huge impact on the school’s sanitation by providing easy access to clean water which has been one of our challenges for some time now,” he said.

Winding up her remarks, Musiime thanked Bbira primary school for embracing the bank’s offer. She said, “Stanbic Bank will continue in its bid to support education as an integral part of the bank’s strategy in fostering development in the country. We believe in a wholesome education to achieve this.”