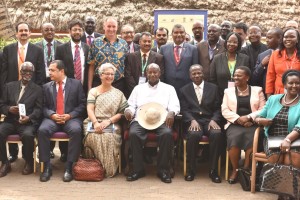 Museveni is flanked by Indian Commerce Secretary, Rita Teotia and Matia Kasaija, the finance minister, along with other visiting Indian officials and Uganda government ministers.

November 21—Indian business people should take advantage of the long historical links which the sub-continent has had with Africa and leverage them to invest in value-added industries such as agro-processing.

President Yoweri Museveni said, “India and Africa can complement each other very well. We have a historical link of using the English language which we should take advantage of. The Indians have been here for the last 130 years. In 1924, the father of Mehta began producing sugar in Uganda.”

Museveni has advised prospective Indian investors to target agro-processing and value-addition to minerals like phosphates, in Uganda. phosphates are a vital input for fertilizer production.

The annual CII-Exim Bank Conclave on India-Africa partnership project is a singular platform that was formed for the purpose of cross-border partnership building, at the institution, government and enterprise levels. The conclave involves discussions for bilateral, economic and business capabilities.

The President told delegations from India, Tanzania, the United Kingdom, Uganda and other neighbouring countries, the vastness of the market between India and Africa was a crucial factor that would be advantageous to both parties if utilized fully.

However Museveni said Uganda imports far more Indian products compared to what Indians import. He, therefore, encouraged India to buy more of Uganda’s products. He also emphasized the need for infrastructure development to easily link a producer to a consumer, and lower the cost of doing business.

In addition, he said human resources, good security and macroeconomic stability were also very essential in the smooth operations of businesses.

Speaking during the same function, the Minister of Finance and Economic Planning, Matia Kasaija, reported that India tops the licenced investments in Uganda. He said there are several investment opportunities in Uganda especiallyin  agriculture, agro-processing, roads, rail and water transport.

“ The Government of Uganda has identified these sectors with the goal of facilitating production. We ask the Indian business community to invest in Uganda to tap into the country’s wide range of minerals that require processing,” he said.