October 31—President Yoweri  Museveni has said the government will increase spending on nurturing young  women across Uganda to set up cottage industries and small enterprises following the success of a pilot project covering the capital, Kampala. 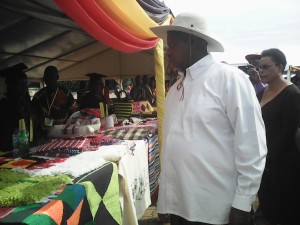 President Museveni said the money used to import many luxury consumer items from such places as Dubai, should instead be spent on training young women to be enterprising.

He said, “Today I spent UGX870 million (nearly $240,000) on organizing this function and buying machines for the girls plus the start-up capital that will be given to each student.

“When you add money that was used in training, it adds up to UGX1.4 billion ($380,000). We are going to spend even more in making sure that all girls in Uganda are skilled and able to live a decent life,” Museveni said recently during an exhibit to showcase the activities of the ‘Skilling the Girl-child Presidential Initiative’.

The first bunch of the 661 young ladies between 16 and 35 graduated at a colourful ceremony at Kololo Independence grounds. Museveni  asked Ugandans to support and promote local products so that the country’s economy can grow.

He said,  “You Ugandans are rich people, but don’t know it yet. Every year, you spend $70 million importing goods from Dubai and China. Most of the goods produced range from clothes, shoes, cosmetics and many more. Most of these things are just luxuries.”

“If that money was spent here, the economy will be better. These girls have been skilled to produce goods and we have more Ugandans who are producing better things that can replace the imported goods. All they need is your support,” he said.

The young ladies were selected from Kampala’s five administrative divisions, with the aim of providing practical skills in order to reduce the number urban unemployed youth. 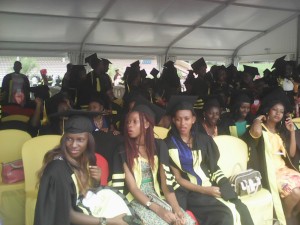 The young ladies were trained in various skills including hair-dressing, baking,weaving and embroidery.

Courses undertaken included hair-dressing, tailoring, knitting, weaving, baking, shoe-making and embroidery. In order to make sure they succeed after the training, the President offered to buy them machines and give them a start-up capital.

Faridah Mayanja, the Project Manager said,  “We had received over 3400 students, but could only take 850 students between age 16 and 35. However some of them dropped out and we were left with 661 students who have attained excellent skills are ready to start up their own businesses.”

She said, “We are convinced in years to come, Uganda will not be a dumping place or supermarket for all those poor quality goods that are currently being imported, because these graduates and more that will be trained under this scheme, will increase production.”

Florence Nakiwala Kiyingi, the state minister for youth said, “Empowering young girls will reduce on the population growth. Once a girl has something to do, they will not produce the normal average six children and will produce four or less that she can take care of. That is why it is necessary for this project to reach all regions of Uganda.”