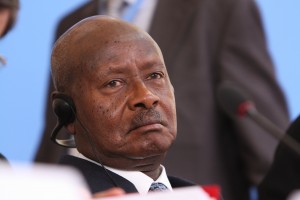 Museveni wants a quick resolution to the matter and has directed the Attorney General’s Office to oversee the details.

July 4—Sudhir Ruparelia, the former majority shareholder in the now liquidated Crane Bank, recently managed to have a sit-down with President Yoweri Museveni concerning his financial obligations to Bank of Uganda (BoU) after completion of a forensic audit.

The meeting happened mid last month on the fringes of the burial of Evasta Kyamulesire Abwooli, the late mother-in-law to Prof. Emmanuel Tumusiime Mutebile, the BoU Governor. Besides, Mutebile, also sitting in was William Byaruhanga, the Attorney General whose office, including that of Directorate of Public Prosecutions (DPP), was directed by Museveni to oversee a speedy resolution to the matter.

According to sources, a repayment schedule to cover liabilities of just over UGX50 billion ($14 million) was worked out. This would involve a new independent valuation of Ruparelia’s assets due to concerns by BoU that some are grossly overvalued. Soon after the meeting, sources say Ruparelia wired $8 million from a foreign account to BoU.

256BN has been told Knight Frank (Uganda) has been contracted to value these assets whose disposal will go towards paying any remaining money Ruparelia owes BoU.

In spite of attempts to block the meeting, brokered by a prominent journalist based in Kamwokya, 256BN has been told Ruparelia managed to present his case to Museveni and also air out his frustrations at the way he is being treated.

From being on the cover of Forbes Africa in 2015, Ruparelia has seen his reputation take a big knock when Crane Bank was seized by BoU in October 2016 due to insolvency.  This came a year after the bank management announced in its annual results as having assets of nearly UGX 1.8 trillion (about $500 million) and 750,000. The customers began fleeing once rumours of the bank’s financial troubles dominated social media in late July and early August.

Poor loan appraisal and insider lending have been cited as leading causes for the bank’s collapse. At the time, BoU said in a statement, ‘Crane Bank Limited is a significantly undercapitalized institution as defined by law, poses a systemic risk to stability of the financial system and that the continuation of Crane Bank activities in its current form is detrimental to the interests of its depositor’. In February 2017, dfcu Bank acquired it with the BoU’s blessings.