Each goal has specific targets to be achieved over the next 15 years, but according to […]

Each goal has specific targets to be achieved over the next 15 years, but according to the writer, without strong partnerships any progress will be limited unless governments, the private sector and civil society all work together.

July 10—Nearly two years ago, the United Nations voted to adopt a new, universal development agenda that would simultaneously end poverty, protect the environment and ensure inclusive economic growth.Sustainable development can be defined as ‘development that meets the needs of the present without compromising the ability of future generations to meet their own needs’. In September 2015, the UN General Assembly agreed on a set of 17 specific targets known as the Sustainable Development Goals (SDGs).

Each goal has specific targets to be achieved over the next 15 years.While each and every one of them holds tremendous merit on its own, I would like to draw attention to the last goal, ‘partnerships’. Without strong partnerships between equally committed entities, lasting progress on the other 16 goals will be doubtful, if not impossible. In order achieve any progress on the SDGs we need a collective effort from what I like to refer to as the ‘triangle of power’ consisting of governments, the private sector and civil society.

Governments need to create enabling frameworks that allow the private sector and civil society to work productively to venture into crucial areas like education, energy and infrastructure; sectors that have been previously off-limits to private investment.

On the other hand, the private sector needs to invest responsibly in businesses that can create value in the form of jobs, knowledge-transfer and the provision of services in addition to ensuring equitable financial returns. Civil society should then function as the glue that links the public and private sectors together to form the triangle.

As the chief marketing officer of a large Egypt-based investment holding company, I fear there is a lack of genuine awareness on the part of the sector that I represent, not only in Egypt but globally, about fulfilling these SDGs. 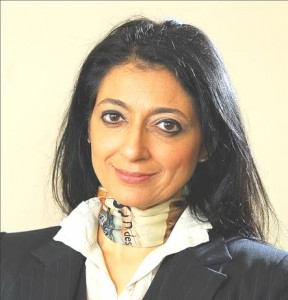 Hammouda calls on the private sector to lead by example and for the golden triangle of private sector, governments and civil society to collaborate in achieving Africa’s sustainability vision and agenda.

According to Ethical Corporation’s State of Responsible Business 2016, which included a survey of 2,045 global sustainability professionals (36% of whom represented private sector entities and brands), more than half of those surveyed said that they had no clear corporate plan to actively engage with the SDGs.

A second study conducted by a sustainability consultancy, ‘Corporate Citizenship’, found this lack of commitment and attention given to the SDGs on the part of the private sector, was creating trust issues with millennials. In fact, more than 80% of them believe that businesses must play a key role in achieving the SDGs.

Another interesting finding in the Ethical Corporation study was that respondents in Africa, Latin America and the Middle East were found to be more engaged with the goals than their counterparts in other more developed parts of the world.

In fact, the lowest levels of engagement (37%) were found in North America. While developed nations tended to focus more on issues such as climate change, countries in Africa for example, were more inclined to concentrate on more pressing needs for their citizens such as education.

In Egypt,we are currently on the brink of an economic revolution of sorts. During 2016, the Egyptian government began implementing a bold economic reform program that included the floatation of the Egyptian pound which led to the currency losing about half its value against the dollar last November.

The record-high inflation that Egypt has witnessed in the past six months has negatively impacted Egyptians from all walks of life. However, the hope is that these reforms will have a positive long term effect as investors gain more confidence in the economy.

In parallel with these pre-growth reforms, it is imperative that the government strengthens its social welfare programs and creates stronger social safety nets for its citizens who are at the lower end of the spectrum.

To that end, the government has just approved an EGP 46 billion ($ 2.48 billion) social security package for FY2017-2018 that includes a basket of assistance programs to support lower and middle income families who are struggling to make ends meet.

Programs like these will be important in future to avoid social unrest. This is where the SDG’s and ‘the triangle of power’ come into play. There has never been a more crucial time to work together towards common goals.But in order to do so, we need clear lines of communication and consistent efforts to reinforce trust and cooperation between the three components of the triangle of power.