July 28, 2017 in Communications, Companies by Editor 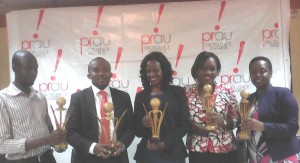 PRAU officials display some of the trophies that will be handed out to winners in the 7th edition of the Excellence Awards.

July 28—The Public Relations Association of Uganda (PRAU) has told members who want to participate in this year’s Excellence Awards to go the extra mile in packaging their submissions so as to increase their chances of winning.

Speaking during the launch of the 7th edition of the awards recently, Cynthia Mpanga, the PRAU president, said the judges are looking for more than ordinary reports.

“We won’t be sorry to take back some of the awards if we do not find the quality we want in any of the submissions. These awards are supposed to encourage PR practitioners to strive for excellence while executing their work,” Mpanga said.

Entries for this year’s awards will be accepted starting from August 1 to September 30 and the winners will be recognized at the gala that will take place on October 27, 2017.

“The awards are a month from now. That’s enough time for members to make quality submissions,” Sheila Kangwagye, the association’s secretary general said.

Kangwagye said PR practitioners who were not PRAU members should take advantage of this period to register with the body so that they can send in entries. The competition is open to PR and communication practitioners, SMEs, government bodies, PR agencies, PR students and in-house departments.

The other categories that fall under the supplementary category are Best Corporate/ Online Publication, Best Social/ Digital Media Campaign and Best Young Communicator of the Year. Under the honorary category, there is PRAU Golden Honors, PRAU Sheppard Honors and People’s Choice Award.