May 26, 2017 in Business, Finance, Hydrocarbons, Infrastructure, Policy by Editor 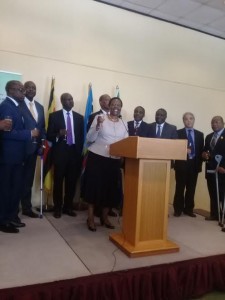 A happy Eng. Muloni is flanked by the Tanzanian delegation and other officials as she briefs the media about the agreement.

May 26— Uganda’s oil will start flowing to market by 2020 if all the indicated timelines are followed after a binding agreement with Tanzania to build a heated pipeline to the coastal port of Tanga was sealed.

“The bilateral negotiations for the Inter Governmental Agreement between the Republic of Uganda and the United Republic of Tanzania commenced in June 2016. The signing of this foundation agreement, upon which the implementation of the project is anchored, is a major milestone.” Eng. Irene Muloni, Uganda’s energy and minerals development minister said.

The two governments have agreed on the basics to construction of the 1445 kilometre, 24 inch crude pipeline from the oil fields found in western Uganda. It will reputedly be the longest electrically heated crude oil pipeline in the world and cost between $3.5 billion to $3.8 billion when completed. It is the centerpiece of the East African Crude Oil Pipeline Project (EACOP).

Eng. Muloni, who represented the Uganda government, said the decision to select the Hoima-Tanga route, (instead of the Kenya alternative), was based on the least cost route for transporting crude oil from Uganda to the coast at an estimated $12.2 per barrel.  A fiscal incentives package offered by the Tanzania government also helped convince the Ugandan side.

Prof Palamagamba Kabudi,  the Tanzania Minister for Constitutional and Legal Affairs, said the EACOP project is a landmark for the two sister nations and the Tanzanian government is committed to expedite its implementation in order to open up the region for further opportunities for trade and also fast track socio-economic development.

Eng. Muloni said a conclusion of the Front End Engineering and Design (FEED) study is due by the end of August 2017. This will provide the estimated costs and clarify on the routes where the pipeline will pass. She said if all the indicated timelines are followed then oil should start flowing by 2020.

The IGA provides foundation for the project as well as other project agreements, including host government agreements, shareholder agreements and financing agreements which will now be discussed.

Adewale Fayani, the General Manager for Total E&P, who represented the Joint Venture Partners, CNOOC, Total and Tullow Oil, congratulated the two governments for the milestone. The three firms have been at the fore of developing Uganda’s oil fields.

“This project has the potential to open a new era is East Africa: with an estimated cost of $3.55 billion, it will significantly contribute to increasing the foreign direct investment per year by over 60% in the two countries during the construction phase. It will trigger important economic growth as well as unlocking East African oil potential by attracting investors and companies  to explore the unexplored potential in the region among other things and we are proud as Joint Venture Partners to contribute to this regional boost,” Adewale said.