September 25—The Nairobi-based Secretariat of the Eastern Africa Farmers Federation (EAFF) is touting eGranary, an online […] 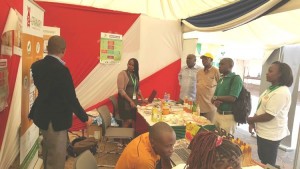 A presentation of eGranary, which the EAFF says is an initiative to empower farmers in input and output markets.

September 25—The Nairobi-based Secretariat of the Eastern Africa Farmers Federation (EAFF) is touting eGranary, an online application launched in 2016, to help regional farmers improve sales of their produce.

“The idea behind eGranary is to support EAFF members to virtually aggregate farm produce. The granary information would be matched with possible buyers based on demanded quantities, quality, price and time of delivery. The system would allow farmers to use simple technologies such as mobile phones,” Stephen Muchiri, the EAFF Executive Director said during their Fourth Congress hosted in Kampala recently.

A major main reason for farmers’ failure to gain a lasting foothold in the formal regional trade is because they are struggling to aggregate enough produce and consequently negotiate and secure better cash returns. The eGranary application enables farmers to send information about their enterprise which then helps EAFF find markets for them.

Formed in 2001, the EAFF is a regional farmer organization that represent approximately 20 million farmers in eastern and central Africa. Current EAFF membership consists of apex  farmers  associations, cooperatives and commodity associations in Burundi, Kenya, Rwanda, South Sudan, Tanzania, Uganda and five from neighbours of the East African Community, including the Democratic Republic of Congo, Djibouti Eritrea and Ethiopia.

Representatives from the EAC were reminded to push their respective governments to assent the East African Cooperative Bill passed by the regional legislature two years ago. “Kenyan President Uhuru Kenyatta has assented to the Bill, but it cannot be operationalized when the rest of the Heads of State from the Community have not appended their signatures such that the Bill becomes a law, ” Elizabeth Nsimadala, the newly elected EAFF President said.

Many Congress participants said once the Bill becomes EAC law, it will facilitate business  coordination in the region  and also provide platform of providing  market information to farmers  which in turn increases trade across the region.

The objective of the EAC Cooperative Societies Bill, 2014 is to provide a legal framework for cooperative societies in line with Article 128 of the Treaty for the Establishment of the EAC strengthening the role of private sector as an effective force for developing economies.

The Bill is based on the understanding that each Partner State shall undertake to encourage the efficient use of resources and to promote the development of private sector organizations which are engaged in all types of economic activities, such as the chambers of commerce and industry, confederations and associations of industry, agriculture among others.

Nsimadala said the Bill has the potential of organizing farmers from the member’s states to form farmer’s cooperatives which strengthen their bargaining power when it comes to selling their produce across the region.