Oil service tenders mooted for May 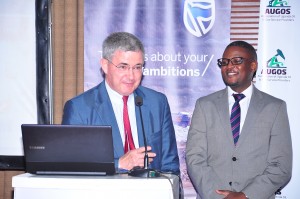 Petit and Okau described the opportunities that will soon become available for Ugandan companies in the Oil and Gas sector.

February 21- Qualified local companies can expect invitations to bid for provision of transport services by about May, as the joint venture between Total E&P and China National Offshore Oil Corporation (CNOOC) begins development of the Buliisa and Kingfisher oil fields in western Uganda.

“Transport is key for the success of the project during the next four years and in two months we will be calling you,” Jean-Yves Petit, the Integrated Project Manager for Total E&P/CNOCC said.

He was speaking during the 4th Local Content Conference on Oil and Gas organised by Stanbic Bank Uganda in Kampala.

The bank partnered with the Ministry of Energy and Mineral Development, the Association of Uganda Oil & Gas Service Providers (AUGOS), Deloitte, MMAKS Advocates and the African Legal Network (ALN) to hold the event under the theme ‘Repositioning local service providers for the next phase of oil development’.

Petit said, “We are talking about 300 trucks a day, moving in and out of Buliisa where 3000 to 4000 people will be handling one million tonnes of oil. The workers will have to regularly go home and that is why PSVs (public service vehicles) are also needed.”

All potential service providers are required to register on the National Supplies Database, which is a basic requirement before anything else.

Together with Tony Otoa Okau, the National Content Manager with Total E&P, the two men described the opportunities that will soon become available for Ugandan companies in the Oil and Gas sector.

The required inputs include gravel and cement; steel, foodstuffs and a range of services like civil construction, mechanical construction, domestic and hazardous waste management, general maintenance, security, personnel management and aviation services. A host of engineers will also be in demand. These contracts will be tendered out as the oil extraction process gathers pace.

However service providers have been advised to acquire and maintain the required standards and exhibit top quality work if they are to financially benefit from the O&G sector.

Towards this end, Total E&P/CNOCC are supporting the new Industry Enhancement Center (IEC). “It will help locals become compliant and make the (oil) business accessible to them. The IEC can also help local service providers to get certified,” Okau said.

In the next couple of years, experts say $20 billion is going to be invested in setting up Uganda’s oil industry, including construction of a new refinery and laying out a pipeline to the Tanzanian port of Tanga. Uganda’s crude reserves are estimated at 6.5 billion barrels, but the recoverable amount is in the range of 1.7 billion barrels.

Patrick Mweheire, the Stanbic CEO, said the golden years when the Ugandan economy was growing at an annual 8% are long over.  “But it is very fortunate that the country has an opportunity to once again achieve rapid growth, if we get certain things right. There are three key points-policy, the political will and partnerships,” he said.

He said on the first two points Uganda is not doing badly, but failing miserably on forming partnerships that are strong enough to do business with the oil companies. “Where is the capacity? We have to acknowledge our shortcomings. We don’t have the capacity to make the right deals.” He said this ‘match-making’ is essential if Ugandans are benefit from the nascent industry.

He reminded participants and invited guests that of the $3.5 billion that went into the exploration phase, less than 7% went to Ugandan service providers. He said Uganda has a long hard journey ahead and Stanbic Bank will continue to act as a catalyst in developing the sector.

Ernest Rubondo, the Executive Director of the Petroleum Authority of Uganda (PAU) said, “This opportunity is not going to be here forever. We need to do our best in this period to seize the opportunities and overcome the challenges.”

He said, “The message I am sending out, is that the intensity is beginning this year. Investment in billions is going to be coming on an annual basis.”

He said a collective effort is crucial or the local content policy will not be implemented in a way that benefits all the players.

Prof. Charles Kwesiga, who heads the Uganda Petroleum Institute, cited the success of Trinidad and Tobago. “The refineries are owned by Trinidadians. We must work harder to emulate them and understand what local content is. For example, how many Ugandans will work on the pipeline as wielders?”

Bernard Ongodia, the Head of National Content Unit at the energy ministry, said about 13,000 jobs will become available in the development phase of the O&G sector with another 150,000 opening up as indirect employment. He said 25 services have been earmarked for local firms while 16 are ring-fenced so that non-Ugandan firms cannot bid.

However, the leading problem is that many Ugandan providers do not have the capacity. He said the Supply Chain Circle at its centre is dominated by foreign companies, but locals only become prominent at the periphery mostly involved with relatively low-key and low-skilled activities. The government and some donor agencies are helping with human resource development, both in managerial and highly technical positions.

However Apollo N. Makubuya from MMAKS Advocates, pointed out that presently there were loopholes in defining a Ugandan/local company.

He suggested that there be a clear requirement that Ugandan/s must have a 51% controlling stake to qualify as s ‘local’ service provider. When the service or goods are not available in Uganda then the venture that imports the item must have a 48% Ugandan ownership. Makubuya also felt that Ugandan law firms be given preference in O&G legal matters before foreigners are considered.