November 16—In Uganda, government doctors and prosecutors are on strike demanding for higher pay and drastically […]

November 16—In Uganda, government doctors and prosecutors are on strike demanding for higher pay and drastically improved working conditions. 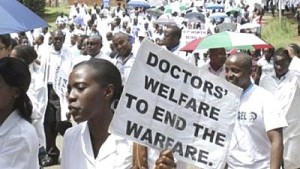 Medical workers want higher salaries which the government cannot afford to give.

There is little use here going into the detailed figures, but things like new cars and houses rank pretty high on the list. All attempts at reaching a compromise have failed and the offer of a salary review commission only seems to have thrown oil onto the fire.

Funny enough it is oil that probably reignited the whole issue after an extended, but uneasy calm over broken promises.

When it comes to salaries, everyone wants a raise. But the government made a blunder after it was seen that the usual excuse of ‘no money’ was suddenly seen to be insincere.

Public sector wage restraint was abandoned at the beginning of the year when it emerged that the government paid out UGX6 billion (just over $1.6 million) to a group of people who apparently saved the country $440 million in a long standing capital gains case against Heritage Oil.

The timing was cruel. Coming at a period when many people are broke after the long festive season, the hand-out seemed not only over generous, but insensitive to thousands of other civil servants who regularly perform above and beyond the call of duty. People like many doctors, nurses and prosecutors.

The fact that the UGX6 billion was not budgeted for, but was quickly put together and paid out just as quickly, only deepened the general resentment. A couple of these beneficiaries offered to return the money. But the harm had already been done and not to mention the indignation expressed by others who told any inquirers to mind their own business.

This set the precedence and most likely let loose the avalanche of pay demands the government is now facing.  Lecturers and teachers are lurking in the background.

What added more to the sense of grievance during recent months, was the announcement that the selected person who will head a team to look into reviving Uganda Airlines will get a monthly salary of UGX70 million (close to $20,000). That is more money than even the Bank of Uganda Governor earns, but at least Prof. Emmanuel Tumusiime Mutebile is running something that actually exists as opposed to a venture that is still largely wishful thinking.

Mention of the BoU brings us to inflation and part of the government’s predicament. Headline inflation has been steadily falling during the past four to six months, however any major pay-hike is liable to reverse this trend.

Once a bigger enough collection of people are flushed with money to spend, prices tend to rise. This means if the government had the money to appease the pay demands, even if only partially, it could still have some adverse effects on the economy.

One thing is clear though, getting the hospitals and courts of law working again is a priority, but where to start?

Calling the striking workers names and arm-twisting their leaders is no help. Although the general public suffers, its sympathies are unlikely to be with the government. Besides, others may feel inclined to join in if the government thinks it has all the cards and acts like a bully. There are two options; sack or talk?

In 1981, President Ronald Reagan sacked all striking air traffic controllers in one swoop and the legacy of that action is not a pretty one even though he kept the planes in the skies.

The doctors and prosecutors want respect and the government wants them back at work. For one thing, most of their demands are financially unrealistic; perhaps only made to get the government’s full attention. Now that they have it, this is the point where real talks should begin. All sides should know what’s in the bank, what the spending priorities are, what qualifies for supplementary considerations and the negative repercussions of excessive borrowing. When everyone is in the same boat, then there is a better chance of rowing in the same direction.