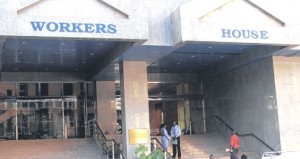 NSSF contributors think of the Fund as their piggy bank and the idea of the government becoming a borrower might not appeal to one and all.

March 15, 2018—Tucked away in the middle of a long list of proposed amendments to the National Social Security Fund (NSSF) Act announced recently, is a suggestion to allow the cash-rich recipient of monthly mandatory savings, to lend to the government and possibly help to pay for such things as Uganda’s $2.2 billion Standard Gauge (SGR).

“Under the proposed amendments, Government will be able to borrow from the NSSF to build much needed infrastructure,” Janat Mukwaya, the gender, labour and social development minister told a news conference last week. She did not specifically mention the SGR, but there is bound to be someone thinking along these lines.

Negotiations with the Chinese government for financing this high-profile project continue to drag along, but alternative sources remain elusive. The World Bank Group has no interest in it and worries about the return on investment for a railway that on paper will have business only going one way unless exports substantially pick up in the near future.

However on several occasions, President Yoweri Museveni has said the SGR to link Malaba at the Kenya/Uganda border to Kampala, is going to be an economic benefit, because it will substantially cut transport costs. Kenya has completed the $3.2 billion Mombasa-Nairobi section and presently working on the Navaisha spur, but the Chinese have yet to commit another estimated $5 billion for the Navaisha-Malaba western leg.

After highlighting the future advantages of the amendments, including partial payments of contributors’ savings before retirement age, Mukwaya also made it clear further talk about liberalising the public pension sector has been shelved.

The government reasoned that opening up mandatory contributions to competition would complete the surrender of both the banking and non-banking financial sector to foreign capital because indigenous firms will have a very limited role to play.

Major foreign and some local  insurance companies must feel gutted, having lobbied and battled for more than half a decade to free up the savings sector dominated by NSSF which reportedly has some 1.7 million members.

The amended law will allow NSSF to maintain its rapid accumulation of assets currently just over $2 billion and still counting with total monthly contributions at one stage hitting close to $30 million in June 2017. Earlier this year, Richard Byarugaba the NSSF managing director said plans are to take the total asset base to $5.6 billion by 2025.

NSSF makes for an attractive proposition. It has more cash to play with than even Uganda Development Bank which the government keeps promising to  recapitalise. The last UGX500 billion injection came three years ago, but nothing to celebrate about since then.

While NSSF contributors were taken up by what positive impact the coming changes may mean for their personal finances, financial analysts were mildly surprised by this bold proposal allowing the government to borrow funds. It is sure to raise some controversy and may put Bank of Uganda in a dilemma of sorts.

What kind of criteria will be used to vet the government’s borrowing needs without adversely affecting contributors’ rates of return?

Traditionally, the NSSF is passionately seen as a ‘workers’ thing’.  Their piggy bank, with the government only playing the role of a joint caretaker, but workers’ money is never trifled with, because it is not public money. This was an essential pillar of the 1985 NSSF Act.

With the proposed amendments however, this will all change. The government will no longer just be a mere caretaker, but also the regulator and a customer as well, albeit a rather special one.

After decades of under or no investment at all, Uganda’s infrastructure deficit is huge and cuts across all areas of the $25 billion economy. Desperate times call for drastic measures and the government can easily put a strong case for borrowing from NSSF. The snag however, is governance issues where past failures are reflected in the numerous red flags that litter the annual Auditor General’s reports.

Both the World Bank and IMF insist money for public investment must increasingly be domestically sourced, particularly through taxes but Uganda’s current 13% ratio to GDP cannot go very far in closing the infrastructure gap. This has meant continued reliance on foreign savings and significantly Chinese, who are now Uganda’s leading bilateral creditor.

One estimate puts the present total sub-Saharan African pension funds at $330 billion with the South African Employees Pension Fund taking up nearly half of that at $120 billion. In a report by Amadou N.R. Sy and published by the Brookings Institution in 2017, Sy says pension funds are able to set aside assets for investment, including infrastructure, but these schemes are currently underutilized on the African continent.

He adds: ‘While some experts argue that pension funds are too risk averse to invest in risky, decades-long infrastructure projects, others contend that with the right governance, regulation, and instruments to assess and manage the risks associated with long-term investment in infrastructure, pension funds could take on a greater role in transforming the continent’s infrastructure landscape’.

Not long ago, in neighbouring Kenya, the regulator announced it was looking into ways for pensions funds (total assets near $10 billion) to invest in government-led infrastructure projects. In 2015, the Tanzania NSSF with nearly $4 billion in assets, invested $140 million in the Kigamboni Toll Bridge. Obviously then, the Uganda government is not stabbing in the dark, the problem is oversight.