Home » Business » Companies » NSSF contributors to get 11.23% on savings

NSSF contributors to get 11.23% on savings

September 28—The National Social Security Fund (NSSF) is offering 11.23% interest rate on contributors’ savings for the financial year 2016/2017 compared to the 12.3% they received the previous year. 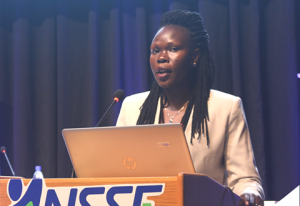 “Although there has been a reduction in the interest paid, there is still a 2.6% above the 10 year average inflation rate of 8.67% which is still in the fund’s target to be members an interest rate that is 2% above the inflation rate,” Evelyn Anite, a junior minister in finance ministry said.

During financial year 2016/17, Uganda’s economy slowed to below 4% due to the general global downturn last year, but an extended dry spell affected domestic agriculture, the country’s economic mainstay.

This slight rate decline was mainly due to a reduction in the commercial interest rates on fixed income assets where NSSF has its biggest investments that were affected by the steady fall of the Central Bank Rate since the beginning of this year.

However although the economy experienced some hardships especially in the agriculture sector, NSSF managed to grow its earnings by 35% from UGX785.5 billion in 2016 to UGX912 billion (just over $250 million) in 2017.

Anite, who is the state minister for investment, commended the NSSF management of the fund for striving against the odds and earning a substantially good interest for the employees’ money.

While presenting a report to the AGM, Richard Byarugaba, the NSSF executive director said the Fund was committed to finding better investment opportunities for members without putting their money at risk.

“We have once again outperformed the economy, meeting and in most instances surpassing our targets. This performance is above industry performance meaning that we are delivering value to the members making the Fund a distinguished saving vehicle,” he said 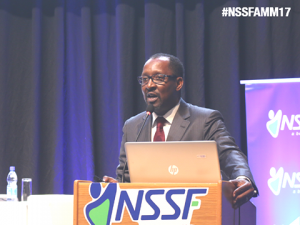 Byarugaba said, “This year there has been a 12% increment in money allocated to paying interest for our members from UGX606 billion to UGX681 billion. With an income of UGX912 billion on UGX7.924 trillion, NSSF’s return on assets 11.51% is above the average industry rate of 8%.”

According to URBRA, the regulator,  retirement benefits sector posted 8% return on assets in 2016 compared to 14% in 2015. ‘The fact that more employees are trusting us with their money shows that we have earned their trust. It is therefore our obligation to continue improving our processes through automation and provide our members with great investment opportunities  and a great customer care service.” Byarugaba said. NSSF’s investment portfolio is mainly in fixed income equity and real estate.