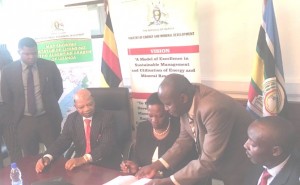 “During the first two years, the company will reprocess existing seismic data, acquire new seismic data, and carry out geological and geophysical studies as well as feasibility studies for drilling from the Lake (Albert) with a minimum expenditure of $2.4 million,” Eng. Irene Muloni, the energy and minerals development minister said at the official signing early this week.

She said, “During the subsequent two years, the company will acquire more seimic data, construct a drilling facility and drill at least one well on the lake at a minimum expenditure of $29 million.”

The licenses will enable the company to begin exploration work in the Ngassa Block, under Lake Albert, in the Albertine Graben, Western Uganda.

Permanent secretary, Robert Kasande said the Ngassa Block, which was initially part of EA2 which is licensed to Tullow, is covered with good quality 2D and 3D seismic data acquired between 2003 and 2008.

“Since the structure lies entirely under the lake, two deviated wells, Ngassa 1 and Ngassa 2 were drilled on land at the periphery of the main structure between 2007 and 2009 respectively in order to access the reservoirs. Both gas and oil shows were encountered by the two wells. However, a large part of the structure still remains untested, hence the need to license it,” Kasande said.

The Minister expressed confidence in Oranto who have experience of over two decades and operating in nine countries. She however challenged them to do a good job and also transfer that experience to Ugandans.

“Our campaign of ‘Buy Uganda Build Uganda’ expands to all sectors of the economy. We hope that you will transfer some of your experience to Ugandans through training and mentorship as well as provide them with job opportunities. “Muloni said.

Prince Arthur Eze, chairman Oranto Petroleum Limited, said they have performed in other countries therefore they will perform as per the details of the contracts signed.

The energy ministry permanent secretary Robert Kasande noted that the signing of the PSAs and issuance of licenses to Oranto will bring ‘accelerated oil and gas activities in the country by the end of next year.’