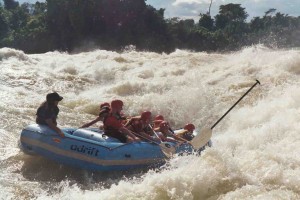 The Minister said Uganda cannot afford to be left behind in marketing its attractions to the world.

June 6—Tourism minister, Ephraim Kamuntu, wants total tourism numbers to top four million annually by 2020   a  more than 300% increase from current levels as he recently unveiled new board members of the Uganda Tourism Board (UTB) in Kampala.

“This is Hakuna Mchezo kisanja (loosely no nonsense elected term) and we need arrivals to double from the current 1.2 million to four million by 2020. The tourism industry is booming across the world and Uganda cannot afford to be left behind,” he said.

The new board is chaired by Daudi Migerako, a former cabinet minister, who replaces prominent publisher and Igongo Cultural Centre owner,  James Tumusiime. The incoming board members include James Lutalo, the Director of Tourism at the Ministry of Tourism, Wildlife & Antiquities; Zigiti Zelda from the Ministry of Finance, Planning and Economic Development;  Tom Davis Wasswa, Head of marketing and commercials at Civil Aviation Authority and a member on the previous Board.

The Minister told the new board not to waste any a moment, but brainstorm initiatives that will add impetus to the tourism sector. He said fortunately, unlike the hyped discovery of oil in western Uganda which can get depleted with time, tourism is a lasting asset.

Godfrey Kiwanda, a state minister for tourism said, “When guest numbers are low from Europe and Asia, the hotel industry ought to offer Ugandans and East Africans a discount to keep the beds occupied.”