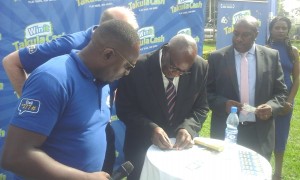 Tumubwoine (centre) officially gets the game underway as Agaba (right) looks on along with LidTech Uganda top management.

December 12–Lotteries and gaming companies operating in Uganda have been told to stick to the regulations governing the industry or face the courts of law.

“As regulator of the lotteries and gaming business in the country, we shall not hesitate to take serious action against any player in the gaming industry. All licensed companies should follow the laws which govern the industry for the good of the general public,”  Edgar Agaba, the Lotteries and Gaming Regulatory Board executive director said.

He said they have been receiving complaints from the general public about some operators who are flaunting the rules. He said it’s time for the regulator to take action to safeguard the public.

Uganda is among the countries in Africa which has attracted gambling and lottery companies mostly concentrating around sports betting which is popular with young men and a source of government concern, because many are shunning productive labour.

Agaba was speaking at the launch of new lottery game ‘Takula Cash’  a brand product of Lidtech Uganda. Agaba said no lottery company should open their doors before 10:00am and only those above 25 years should participate in the games of chance. Gaming company owners who fall foul of the law face up to two years in jail or a fine of UGX1 million (about $280).

He said, “It’s illegal for gaming companies to start their business before 10:00 am.  As  regulator we are going to improve on our supervision work those found operating against the law. Their operating licenses will be cancelled and where necessary we shall involve the courts of law to prosecute the offenders.”

Lidtech Uganda is subsidiary of Lidtech Africa a pan-African Lottery company based in South Africa. The ‘Takula cash’ launch was presided over by the Chairman board of Lotteries and Gaming Regulatory Board, Manzi Tumubwoine.