February 9—Nine standards have been set for staple foods by the Eastern Africa Grain Council (EAGC) as it moves towards a harmonized system which is expected to boost regional trade. 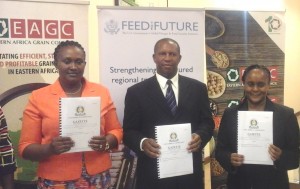 Namara, Stanley Ahimbisibwe from the trade ministey and Ejalu display copies of the new standards documentation that will take effect across the region.

“Smooth adoption and application of the gazetted standards will see farmers accessing better and greater markets within the region estimated at a population of 186,998,614 while consumers will be provided with safe and high quality food grain products,” Gerald Masila, the EAGC executive director said.

According to the Famine Early Warning Network, white maize is the main staple grain consumed in Tanzania, Kenya, and Ethiopia. In Uganda, white maize is grown mainly as a commercial crop for export in the region. Imported rice is a major staple for Somalia, which mainly consume belem—the imported red rice. Tanzania is also a major producer and source of rice in the region while Kenya and Uganda are minor producers. Both red and white sorghum are produced and consumed in the region. This is an important staple in Sudan and Somalia as well as in other marginal agricultural areas of the region.

‎Anet Namara, the Assistant Commissioner in-charge of EAC Integration at the Ministry of East African Community Affairs said the standards will complement other measures in place to strengthen regional integration.

“The EAC has been implementing the EAC Customs Union since 1st July 2005. This was an effort to eliminate internal tariffs on goods produced within our territories in order to promote intra-EAC trade, adopt a common tax policy on third party goods and eliminate all non-tariff barriers to trade. With the grain standards,we shall see great progress in trade among EAC member states,” she said.

Speaking on behalf of the Uganda National Bureau of Standards, Patricia Ejalu, the Deputy Executive Director in- charge of Standards disclosed plans to enforce compliance of the new harmonized standards by tightening checks on grain quality at border points. Ejalu said Uganda being one of the leading producers of grains, its traders will benefit more from the harmonized standards.

However according to latest assessments, African food security in 2018 is likely to be undermined by drought, particularly in East Africa, the spread of fall army-worms, on-going conflict in South Sudan and the potential deterioration of socio-political conditions in the Democratic Republic of the Congo.