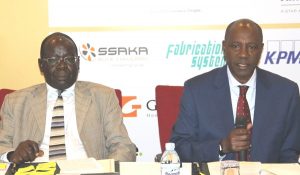 Karuhanga (right) said with the right mindsets and policies in place Uganda’s minerals sector can change for the better.

September 27, 2018—Government bureaucrats across Africa, who lack the prerequisite background knowledge to negotiate mining deals, is being put forward as a major reason for under-performing minerals sectors in many countries as participants prepare for Uganda’s Seventh Annual Minerals Conference in Kampala next week.

“The problem with the minerals industry in Africa is that negotiators on behalf of African governments are done by less qualified and inexperienced people than the mining companies’ representatives. Hence governments end up with raw deals. These are some of the issues that we want to address in this upcoming,” Elly Karuhanga, who heads the Uganda Chamber of Mines and Petroleum (UCMP) said during a news conference.

He said African countries are increasingly being misled by many major mining companies because the government negotiators are inexperienced and do not understand the true worth of their mineral deposits.

Once again, UCMP is joining the energy and minerals development ministry to organize the conference scheduled for October 2 and 3.  Under the theme ‘East Africa: The continent’s next mining investment haven’ an estimated 1000 government officials and private sector representatives from 40 countries are expected to attend.

Karuhanga said, “We have over 50 minerals. Most of these are still in the ground and are under exploited. With the right policies and mindset, Uganda which is very gifted by God can benefit immensely from its minerals and finance our developments without depending on loans.”

Experts agree Uganda has abundant, but poorly developed and include copper, cobalt, limestone, and salt. The country also has several untapped reserves of lucrative minerals like gold, nickel, platinum, and marble.

“The role of the Chamber is to continuously highlight the issues affecting the mining sector to the attention of the public and the government so that we can influence policies that will develop the sector,” he said.