Home » Travel & Tourism » Nearly half of world’s giraffes in Uganda

Nearly half of world’s giraffes in Uganda

August 21—Uganda has nearly half of the remaining giraffes left in the world and efforts to protect them, not only as a national heritage, but also a leading tourist attraction, will continue unabated. 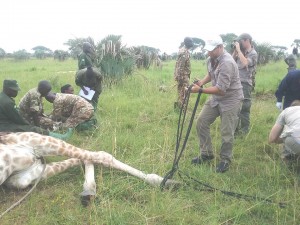 Moving the giraffes will mean not only more space for them to roam the savanah, but also bring the animals closer for viewing.

Currently, 20 giraffes are being relocated from the northern to the southern banks of the River Nile by Uganda Wildlife Authority (UWA) and partners. The move is intended to make sure the endangered mammals also have more space. They like semi-arid, open woodlands that have scattered trees and bushes, making savannah the most suitable terrain for these animals.

UWA executive director, Dr. Andrew Seguya told 265BN, “Soon you will not have to travel to Kidepo Valley National Park or Murchison Falls National Park to see a giraffe as the Uganda Wildlife Educational Centre will also have them. By the way Uganda has more than 40% of the surviving giraffes in the world.”

Giraffes may look peaceful, but they are not an easy prey. Besides they also have an excellent sight so they can be long gone before a predator can get too close to them. According to National Geographic, thanks to their long legs, giraffes are very fast. They can run up to nearly 60kph in short bursts and run for longer stretches at 16kph.

For more than two centuries, one of the most endangered sub-species in Africa, the Rothschild’s giraffes, have not lived below the Nile River in Murchison Falls National Park. The re-location exercise involves veterinarians, rangers, students and ecologists from across the world.