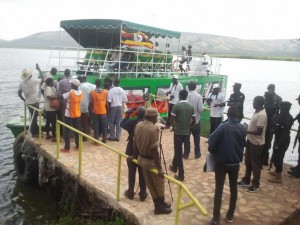 One of the newly acquired boats imported from China attracted plenty of excitement among the locals who wanted a ride.

May 30—Thousands of residents in the vicinity of Lake Mburo National Park (LMNP) swarmed the sanctuary after the Uganda Wildlife Authority (UWA) declared an ‘Open Day’ targeting locals.

Normally locals pay at least $6 while non-resident foreigner visitor are charged $40 to enter the national park.

“This is just a starter. But it is going to roll out in the whole country. UWA, Uganda Tourism Board and the Ministry are determined to have numbers shoot up. This is the country’s main export and we ought to love it, market it and conserve it,” Godfrey Kiwanda, a state minister for tourism said over the weekend.

The bulk of revenues from Uganda’s tourism industry comes from spending by foreigner visitors who last year earned the country just over a billion US dollars. Tourism authorities want citizens to take a greater interest in Uganda’s rich biodiversity and banish the persistent feeling that the country’s 10 national parks are only for foreigners.

LMNP is located just over 200 kilometres west of Kampala and is the smallest of Uganda’s savannah national parks.  Kiwanda advised residents to exploit opportunities in tourism by making handicrafts, entertaining or transporting guests.

Kiwanda  also flagged off the Wild Run 10 kilometre race from the Rwakobo Gate which had participants jogging alongside wild animals, but with park rangers never far away. The winners took home wide smiles of satisfaction, jerri-cans, medals and fame.

Excited locals were able to experience what transpires in the park, including seeing animals such as zebras, buffaloes and elands. But the main excitement was when they were showed the newly imported UWA executive boats from China with a seating capacity of 45 to ply the Lake Mburo waters. The boats will also feature at Queen Elizabeth National Park and Murchison Falls National Park.

Kiwanda said, “We have to boost numbers if the revenue is to shoot up. On board you can charge and access wifi.  We are now waiting for five buses to ferry domestic tourists from point A to point B. You will enjoy a bar, restaurant and video screen while on board.”

The Open Day is destined to be a calendar day in each of the 10 National Parks in the country.