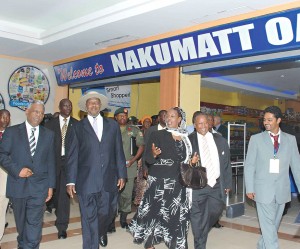 Good old days, with President Yoweri Museveni (in hat) given a tour of the very first Nakumatt store in Kampala during 2009.

January 24—Nakumatt, the Kenyan mass retailer currently beset by financial woes, finally exited Uganda’s market in 2017 with unpaid rent, but this has not dampened the popularity of Kampala’s upscale shopping malls.

Knight Frank (Uganda), the property managers and consultants, say in their update for the first half 2017, ‘In spite of the Nakumatt woes, primary data from Knight Frank managed malls in Uganda reveals that footfall traffic grew by 20% in H1 2017 compared to the same period last year.

‘With an anchor tenant not stocked and trading, this can only lead us to believe that the ‘retailtainment’ strategy of Knight Frank managed malls is being embraced by local consumers, and the transitioning from traditional high street retail units into shopping malls is gaining momentum in Uganda’, the report reads in part.

Bascially, retailtainment is a modern trend that combines shopping and entertainment opportunities to connect effectively with people. Keeping people interested and occupied while they shop or browse helps encourage spending.

In October 2017, Nakumatt applied for administration and early this week, following sustained pressure from major suppliers, the Kenya High Court sanctioned the application with Peter Kahi of PKF Consulting appointed as Administator. He has 60 days to come up with a recovery plan.

KF (Uganda) concedes that the status of Nakumatt and its possible demise is of great concern to the East African market as it will have repercussions on financial institutions, fast moving consumer goods (FMCG) manufacturers and distributors, property investors and most importantly and unfortunately, job losses.

Towards mid-2017, KF (Uganda) closed Nakumatt stores at Acacia Mall in Kololo, Village Mall in Bugolobi and Victoria Mall in Entebbe. According to the company, a subsidiary of the UK-based firm, the anchor tenant space at these malls will undergo re-development for new tenants, and should be open for trade by the first quarter of 2018. South Africa’s Shoprite is already in line to take up the Acacia Mall space and is due to open for business this year.

The report states ‘These re-tenanting strategies will add value to the existing tenant mix of the malls and enhance the consumer experience created by having a strong anchor, and will also take retailing to a new level in the Ugandan market’.

According to the update, the retail sector has been boosted by the formal announcement of The Arena Mall, a 14,000 square metre convenience, fashion and leisure mall to be built in Nsambya on the outskirts of the city centre. The development by Chestnut Uganda Limited will open for trade in the first quarter of 2019. Knight Frank have acted as development consultants and leasing agents for the mall which is already pre-let to 60% prior to construction commencement.
I