Museveni moots scanners at the borders 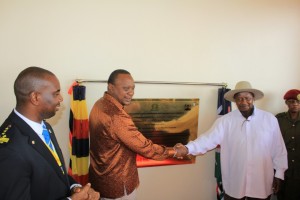 Kenyatta and Museveni officially open the facility with Uganda Revenue Authority’s Dicksons Kateshumbwa, the Commissoner of Customs looks on.

“We need to find more dependable means of protecting our borders. We cannot depend on police officers who are sometimes looking for kintu kidogo (bribes). We are already in talks to put in place a modern monitoring system on Lake Victoria and scanners at the land borders so that people do not smuggle in goods that are not allowed,” President Yoweri Museveni said recently during the official opening of the Busia One Stop Border Post (OSBP) with his counterpart, Kenya’s President Uhuru Kenyatta.

Museveni said there is need for EAC countries to find better ways of monitoring Lake Victoria and the borders to prevent smugglers. He said currently, Uganda and  neighbouring countries are using ordinary means like physical inspection which cannot completely stop people from smuggling unauthorised goods.

However sources speaking to 256BN have queried the suggestion due to the high costs involved, both in the purchase and operation of such systems. A leading concern is whether trucking companies will have to subsidise the scanning by having to pay fees at the border which will defeat objectives of reducing the cost of doing business in the region.

Basically, OSBP does away with the need for travelers and goods to stop twice to undertake border crossing formalities, because everything is done once under the concept of joint control by the relevant customs, immigration and security personnel. Busia is one of two major crossing points along the Kenya-Uganda border, the other being Malaba further north which is also an OSBP. Just over 20 OBSPs are planned for the EAC with the bulk of the funding coming from bilateral donor countries in western Europe and Canada. 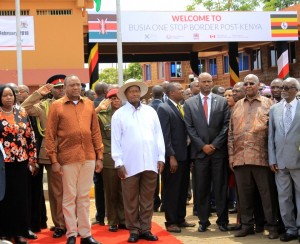 The Presidents, along with other dignitaries and top officials, salute the national anthems before being shown around Busia OSBP.

Kenyatta said as a region, the EAC is a trading power house, but needs more cooperation and unity among the Partner States if they are to compete fairly with other giant regions that are more developed. “We should remove useless border barriers for our people and goods to move more freely. This is the only way we are going to develop as a community,” he said.

He said the EAC should now focus more on moving away from being consumers to producers so as to balance trade and earn more from exports. “We must remove any barriers to make trading for our people less costly. I want to thank TradeMark East Africa and other development partners for being practical partners in easing trade in the region,” Kenyatta said.

Frank Matsaert, the CEO of TMEA, said construction of the Busia OSBP which was launched in 2012 was carried out with funding of $11.7 million from the UK government through DfID, the development agency and another $1.2 million from the Canadian government for systems and related software infrastructure. TMEA is the main channel for donor money used in easing trading barriers across the EAC.

“This is one of the best performing OSBP and we are pleased at the difference it has made in border trading. We have seen an increase in cross-border trade. The time and money spent by traders in customs clearing has also reduced by 70% and customer satisfaction is at 80%. I want to thank the two governments for efforts put in to make this possible and we look forward to working with them on other projects aimed at facilitating trade,” Matsaert said

According to Uganda’s trade minister, Amelia Kyambadde, since the Busia OSBP became operational in 2015/2016, Uganda revenue collection has grown by 45%  from UGX436.3 billion (nearly $120 million) in FY 2013/2014 to UGX798.5 billion ($215 million) in FY2016/2017 due to faster turn around times with fuel imports contributing 90% of the total tax revenue collected. There has also been a 56% growth in value of exports through Busia OSBP with top item being grains, mainly maize.