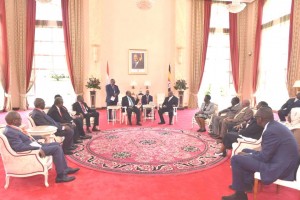 The two leaders talked informally before going into the proceedings of the Uganda-Sudan Business Forum held at Entebbe.

November 15—President Yoweri Museveni has said the government is finalizing efforts to revitalize Uganda Airlines as a way to boost the economy.

“I am convinced that Uganda Airlines will succeed mainly because of six factors: Ugandans in the Diaspora, the Indian community, businessmen, tourists, regional traffic and internal travel. There are many industries developing in the country that will use the airline to export their products,” Museveni said.

Museveni said Ugandans in the Diaspora, especially in South Africa, Canada and United States, as well as Indians who were expelled from Uganda by Idi Amin in the United Kingdom are inconvenienced by other airlines that must pass through their hubs. He said once Uganda Airlines is revived they will benefit from direct travel.

“Uganda has a captive travelling population. Many people want a flying schedule that suits them and yet most of the airlines look at nationalism and must first pass through their countries of origin. In terms of tourism, no country can compete with Uganda if we have an airline and promote our nice weather, wildlife and the other tourist attractions,” he said.

He also said there are many Ugandans traveling and exporting cargo to Bunya in the Democratic Republic of Congo, Juba in South Sudan, Nairobi, Dar es Salaam and Lagos in Nigeria and the airline would make their travel and business faster.

The President was speaking at the Uganda-Sudan Business Forum early this week. The Sudan delegation was headed by Sudan President Omar Hassan Ahmed Al-Bashir arrived in Uganda on Monday for a two day-state visit. Museveni said once formalities are done, Khartoum will be one of the airline’s first destinations.

According to a joint statement, the talks were held in a “cordial and friendly atmosphere” focusing on bilateral relations, regional peace and security, and international matters of mutual interest.

The two leaders reviewed implementation of the decisions made during President Museveni’s trip to Sudan on September 15-16, 2015 as well as the 5th Joint Ministerial Commission (JMC). They noted the progress being made in cooperation between the two countries particularly in the sectors of trade and investment, transport, security and education.

The Heads of State witnessed the signing of a Memorandum of Understanding on Cooperation in Higher Education between the two countries.

They directed their respective Ministers to fast-track implementation of all decisions agreed upon and conclude all pending memoranda of understanding for cooperation in the areas of agriculture, sports and youth as well as security before the next JMC to be hosted by Uganda by March 2018.

The two leaders noted the ongoing collaboration between the respective standards agencies with regard to quality assurance of coffee exports and stressed the need for value addition. Sudan imports 20 percent of Uganda coffee and is the single biggest export market for the product from which about  $100 million is earned annually.